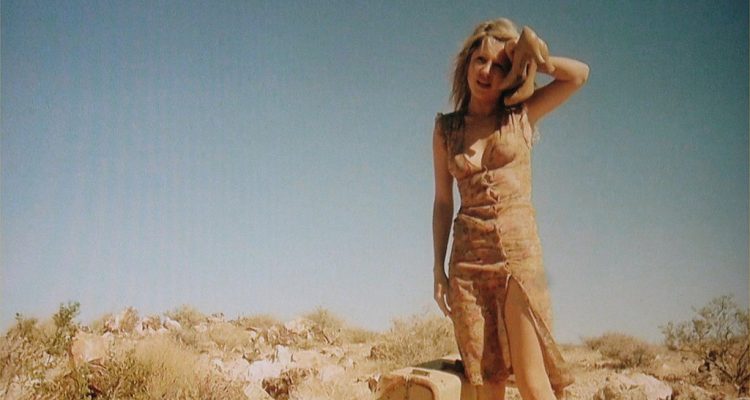 Nicely shot with a fantastic score by Ennio Morricone.

Plot: Orson Welles, as judge Rauch, holds a lengthy trial against Jess Tyler, a caretaker deserted by his wife ten years before, who’s accused of improper relations with his daughter Kady. Complications follows when Wash, father of Kady’s baby, comes back to take her away.

Review: Set in the 1930’s on the scorching border of Arizona and Nevada, Matt Cimber’s adaptation of James Cain’s novel, Butterfly begins with a young woman named Kady (played by newcomer Pia Zadora) hitching a ride through the desert. She’s bored. She’s sexy with her summer dress hanging loosely on her supple frame. She’s picked up by a creep, who tries to molest her (and goes a long way towards that), and she escapes, leaving the guy spitting angry. She ends up on the homestead of a silver miner named Jess (played by Stacey Keach), and she claims that she’s his long-lost daughter. He believes her, though he has an instant attraction towards her. And why shouldn’t he? Over the course of a few days, she teases him, leads him on, and encourages him to engage in obviously inappropriate activity for a father and daughter, but there’s something about her that he just can’t resist. Just as their relationship could turn incestuous, another of his estranged family members turns up with Kady’s baby, and for a second there it seems like Jess, Kady, and the baby will be a family, but then Kady’s rich fiancé turns up as well, offering his penance and his hand in marriage. Jess really has no choice but to give his blessing, but things get complicated when his feelings for Kady get in the way. He and she consummate their attraction in secret, but a rascal neighbor (played by the great Buck Flower) spies on them and takes his grievance to the court, which charges Jess and Kady with incest. During their trial, presided over by the judge (played by Orson Welles in a rich supporting performance), Jess must prove that Kady is actually not his daughter so that they don’t each go to prison for ten years.

Watching the sultry potboiler Butterfly was a reminder of a time and era when movies like this were carefully made with really good actors, and I appreciated the old-fashioned film aesthetic of the production. It was shot extremely well (by Eddy Van Der Enden), beautifully scored by Ennio Morricone, and while the story is kinda lurid, it recalls the pulpy aspect of sex and crime novels of the yellow-paged era. I liked it. Pia Zadora definitely had something: She was unabashed in her sultriness, and the film does her justice without exploiting her. Stacey Keach played his part really well (it’s a difficult role), and fans of sexy dramas in the vein of The Lover, Emmanuel, and Turkish Delight should enjoy it.

Cinema Epoch’s DVD looks pretty good in 16×9 widescreen, though it’s not in high definition. There’s an audio commentary by Zadora and Cimber, and on-camera interviews with Keach, Zadora, and Cimber. It’s worth adding to your collection.