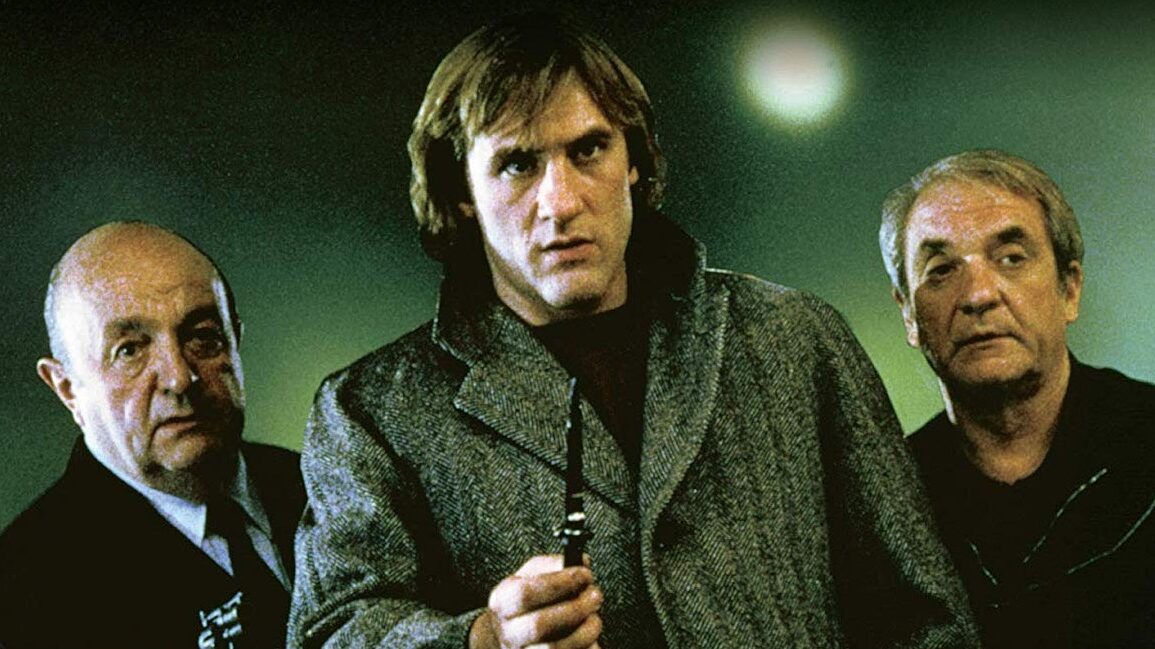 Buffet Froid (that’s Cold Cuts in English) is a staggeringly strange farce that doesn’t reach for comedy, per se, but it’s definitely not meant to be taken seriously.

Plot: Black comedy about solitude and the dehumanization of the modern world, through the adventures of three men.

Review: A couple squatting in an abandoned high-rise apartment complex live a strange life: Alphonse (played by Gerard Depardieu), the husband, is unemployed and stalks the streets and subways at night. He carries a knife for protection, and he looks for friends in the middle of the night, but usually scares people away with his abrupt conversation starters like, “Do you ever think about killing anybody?” An encounter with a bookkeeper in the subways ends up with the other man stabbed in the gut with Alphonse’s knife, but for the life of him, he doesn’t remember stabbing the guy. Alphonse wanders home alone, despairing that he might’ve killed someone, and when he confesses to his wife over dinner what happened, her response is to throw the knife in the dishwasher. Later that night, Alphonse realizes that he has a neighbor upstairs: a washed-up police inspector, who refuses to believe Alphonse’s murder confession. In fact, the police inspector is so sick and tired of hearing confessions of crimes that he’d rather encourage crime than enforce the law. The next night, Alphonse’s wife is out for a stroll when she’s murdered by a serial killer. Alphonse doesn’t know how to feel about this turn of events, and seeking solace with his police inspector neighbor, they sit down and drink over it and get a knock on the door – it’s his wife’s killer, who has come to smell his victim’s clothes and to get a feel for the life he took. Alphonse and the inspector invite him in, offer him a drink, and the three of them hang out for days, looking for meaning or purpose in their lives. Another man stops by and asks Alphonse to kill him and take his own wife as his mistress. Alphonse begrudgingly accepts because his wife’s killer only kills single women. When Alphonse kills the man (sort of by accident), his takes the man’s wife home and sleeps with her, but when he leaves her alone the next night, the serial killer strangles her in her sleep. And yet, Alphonse, the police inspector, and the serial killer continue to hang out, although they’re not friends. And so it goes for awhile, until more assassinations and bizarre encounters continue, until at last Alphonse meets the most beautiful woman he’s ever met (played by the stunning Carole Bouquet from For Your Eyes Only), who has hunted him for the crime of murdering her father in the subway …

Now here’s a weird film if I’ve ever seen one. Buffet Froid (that’s Cold Cuts in English) is a staggeringly strange farce that doesn’t reach for comedy, per se, but it’s definitely not meant to be taken seriously. It plays it all in a deadpan style to the point of being a smorgasbord of despair and loneliness, and each situation grows increasingly more odd, so it’s difficult to gauge this movie’s wavelength. The acting is okay, but what are we to make of these performances because no one is reaching for anything beyond the simplicity of misery. There are a few little moments that made me smile like when Depardieu fusses over which jam he wants on his toast, or when everyone is aiming a gun at a man coming at them, who falls over dead from a knife wound, but this isn’t what I’d call a funny movie at all. It left me feeling detached and cold indeed. Director Bertrand Blier went for an alienated mood, and he achieved it.

Kino Classics has just released a Blu-ray or Buffet Froid, presented in a 1:66:1 aspect ratio, and includes an archival interview with the director, plus the trailer, a new audio commentary by a film critic, and a booklet with an essay.