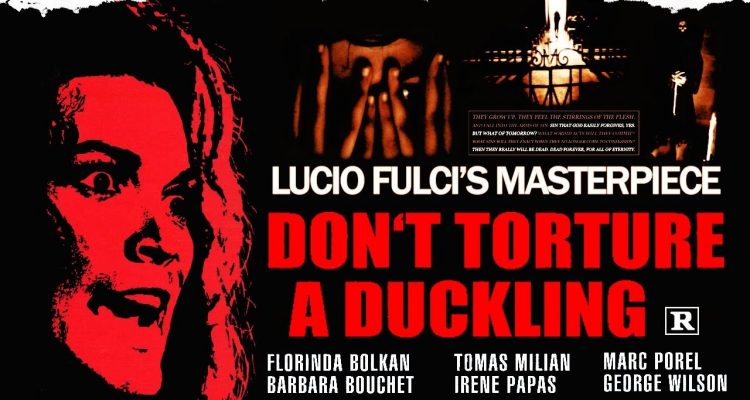 Fulci’s more devoted fans will want to give this one a shot because it shows a much more mature and calculated approach to his style of directing.

Plot: A reporter and a promiscuous young woman try to solve a series of child killings in a remote southern Italian town that’s rife with superstition and distrust of outsiders.

Review: Young boys are being strangled to death in a coastal Italian town, and families are reeling from the devastating loss. A serial killer is at work, and the police pick up a local halfwit pervert for the crimes. It’s obvious to the police that the man they’ve got is just a red herring, though: the murders continue, and the authorities are shy of anyone with a motive. The resident witch is soon apprehended, and while she confesses to the crimes, she is almost immediately released because her claims turn out to be unfounded, but that doesn’t stop the angry fathers of the victims to kill her for their own peace of mind. With the killer still loose, the suspects dwindle to just a few: Can it be a newly arrived seductress who seduces boys for her own amusement? Or how about the journalist reporting on the killings? Or maybe it could be the handsome priest at the boy’s school? Perhaps it’s none of these, but somebody else altogether.

An underrated Lucio Fulci dramatic giallo with some gory scenes and a sinister, disturbing plot, Don’t Torture a Duckling is a unique film in the Italian horror sub-genre. It moves at a slow pace, but builds to a violent crescendo, and yet it’s quite unlike any of his other more well known films like The Beyond, The House by the Cemetery, or Zombie. His more devoted fans will want to give this one a shot because it shows a much more mature and calculated approach to his style of directing.

Arrow Video has just released a painstakingly restored Blu-ray / DVD combo edition of Don’t Torture a Duckling, and the booklet insert has an interesting essay about the film as well as a very informative detailing of how the film was restored and transferred to digital. There are plenty of supplemental features as well such as a new audio commentary, video essays, and interviews.