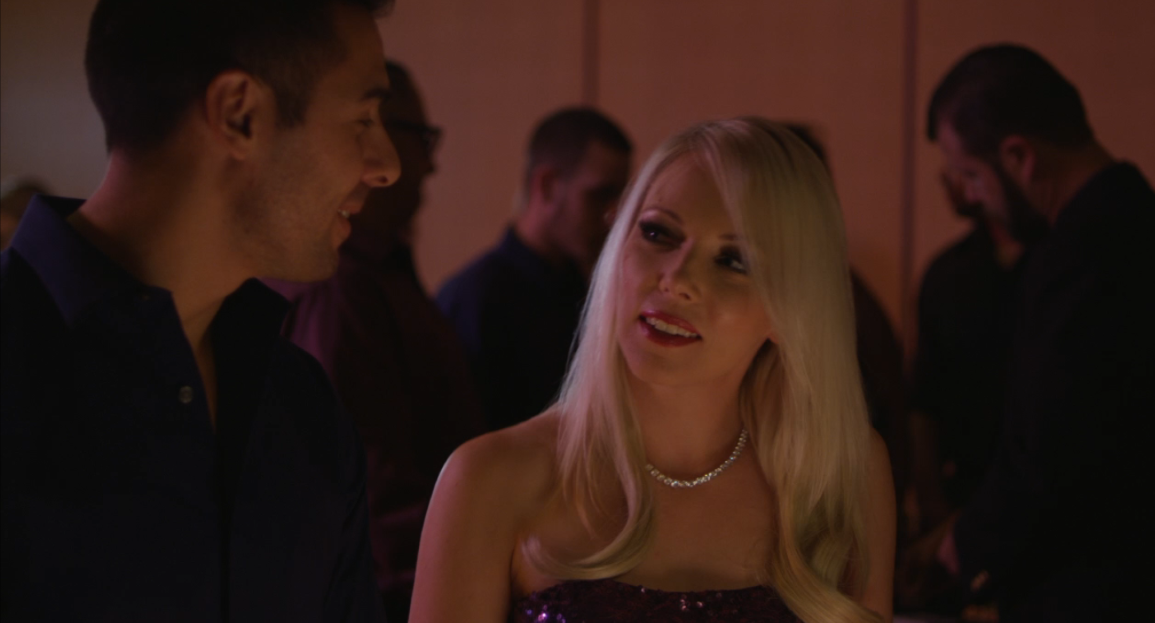 Plot: What happens in Vegas doesn’t stay there. An East Coast radio DJ working for his gangster uncle is targeted by the mob itself after his girlfriend witnesses a murder.

Review: Director Rickey Bird Jr. (Border Brothers) brings a bounty of booze, broads and blackjack in… Booze, Broads & Blackjack, a delightfully dark noir crime thriller from Hectic Films and Good Knight Productions. Written for the screen and based on the novel by Carl J Nicita, Booze, Broads & Blackjack follows the story of the cleverly named Jack King (Joe Raffa), a small time, heavy drinking disc jockey who is a bigger time gambler. After winning big at blackjack, he takes his girlfriend Misty (Erica Rey) for a night on the town and they stay the night at a suite owned by mobster uncle Vinny (Vincent Pastore of Sopranos fame). Misty heads out for a smoke, only to witness a mob hit ordered by Vinny, leading to favors asked, travel booked, a mysterious plot device briefcase received and a white hot ex-girlfriend encountered. Other producers and the writer and director appear in additional roles or cameos, including Felissa Rose, a B-movie icon known from Sleepaway Camp. Can Jack and Misty survive the murderous world of organized crime? Will the appearance of Jack’s ex complicate matters?

A competently made mobster film is a little like daytime television: if Matlock is on its 733rd rerun, it’s still probably enjoyable. And, like that 733rd Matlock rerun, Booze, Broads & Bullets is worthwhile and hits on all the fundamental filmmaking elements despite one or more of those being seen all too many times before. Hitmen, strippers, boobs, stripper boobs, tasteful sex scenes, frightened witnesses, crooked cops, mysterious briefcases and morally ambiguous old flames – it’s all here.

Noir mobster films tend to suffer a lack of identifiable or sympathetic protagonists, and this one is no exception. Jack King cheats on his girlfriend in a heartbeat, and while there isn’t anything to establish any prior lack of relationship contentment, the way this film goes about the sudden shift is arguably more realistic to such a character. However, that exact mindset is apparent throughout the development of the plot, as very little that occurs will offer much in the way of suspense or tension in ways that are not matter-of-factly moved on to the next set of circumstances. Much of what the plot sets up simply makes way for the next scene to occur, only for any such setup to be neatly tied together rather quickly by virtue of the film’s pace. There are a few unexpected plot twists, but nothing that will throw the viewer off to any extreme degree.

What might be unexpected, however, is how much production value can be found in such a small budget. A trained critical eye is likely to catch spots or situations where the budget betrays the story, but even if and when that is the case, everyone does the best they can with what they’re given, and most of it is smooth enough. The Silence Club’s soundtrack is a major high point for the noir theme, and Vincent Pastore’s presence is every bit as intimidating and authentic as it is typecast. There are some instances where the mixing and dialogue sounds uneven or overly quiet, something that any ’90s VHS era connoisseur will recognize, but the setting and neon lighting is suitably sleazy and tacky. Too often will lower budget features feel claustrophobic and cramped, whereas this achieves the opposite effect and manages to create a larger world outside of a given hotel room or alley.

Just like in real life, it’s hard to go wrong with Booze, Broads & Blackjack. Viewers might not walk away from the proverbial blackjack table with much more than they already have, but leaving the table with just a few more chips is fun enough. Any film is a gamble, and this one quits while it’s ahead before becoming a degenerate gambler and blowing it all in one spot. Go ahead and try your hand.