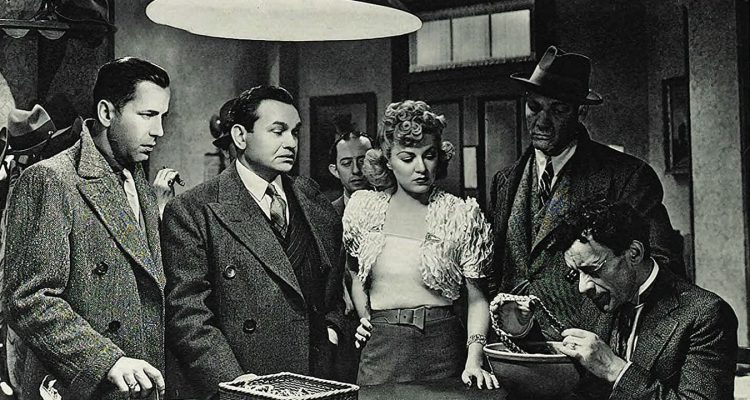 The Amazing Dr. Clitterhouse is a fun and engaging story, featuring a spirited performance by Edward G. Robinson

Plot: Dr. Clitterhouse (Edward G. Robinson) is a successful doctor who decides to study the criminal mind by committing a series of daring robberies.

Review:  I can’t admit to being a huge Edward G. Robinson fan. It’s not because I don’t like Edward G. – it’s mostly because I just haven’t come across his movies too often. My impression of him, based on his breakout role in Little Caesar (and backed up when I viewed his tough-guy role in Key Largo), is of an uneducated brute who coldly kills whoever gets in his way.

Enter The Amazing Dr. Clitterhouse, a crime-comedy starring Robinson, along with Claire Trevor and Humphrey Bogart. Watching the movie, I saw a new side to Edward G. that I don’t recall ever seeing, and it was terrific. His performance is so dynamic and so spirited, I feel like he should have won awards for it.

The story itself is definitely quirky. You can’t really get a handle on the Clitterhouse character – is he a villain? Is he insane? You’re constantly wondering what his next move is going to be, and that intrigue keeps you glued to what he does. Robinson masters Clitterhouse’s rapid-fire dialogue, with a particularly entertaining exchange between him and a policeman, where you end up wondering who exactly is questioning who. Claire Trevor is good as the tough-as-nails fence who has a soft spot for Clitterhouse. Humphrey Bogart is his usual magnetic self as the villainous hood who is jealous of Clitterhouse’s influence over his mob. The supporting cast is covered with known characters actors, and they all play their parts well.

As a comedy, other than the exchange between Clitterhouse and the cop, there’s not much to offer in the way of comedy. It’s one of those clever movies that while it probably won’t illicit a belly-laugh, you’re going to be so into the outcome of the story, you probably won’t even notice that the comedy misses a lot of the time.

So, I encourage you to check out this movie. While it’s not known as one of the classic Bogart or Robinson gangster films, it’s a hidden gem that has an engaging story, memorable characters, and a quick, breezy pace that will keep you interested to the end.