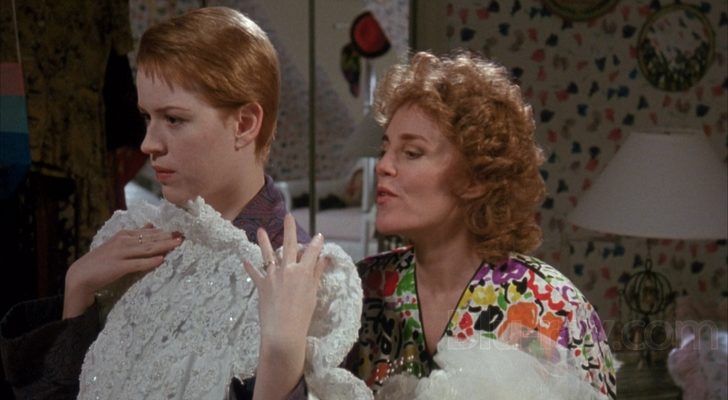 Both films aren’t very funny, unfortunately. Betsy’s Wedding has a wasted cast, and is full of unappealing characters. Holy Matrimony is such a bizarre and inappropriate movie, even when it was first released. Kino’s release gives both of these films a nice HD widescreen treatment. Some people may like these movies more than I did.

Review: Neurotic building contractor Eddie Hopper (Alan Alda, who also wrote and directed) is thrown for a loop when his free spirited daughter Betsy (Molly Ringwald with a pixie cut) comes home and announces she’s engaged to be married. Eddie embraces the prospect, but has absolutely no idea how big of an affair a wedding can be. Betsy’s fiancé’s family is “connected” to the mafia, and while Eddie is given the chance to hand over all financial responsibility for the wedding to the future in-laws, he decides to carry the entire load himself … which proves to be a comedy of overbearing proportions.

Released the year before the vastly superior and very similar Father of the Bride with Steve Martin, Betsy’s Wedding is cursed by having unappealing and coarse characters, an unsympathetic bride we can’t fall in love with, and a meandering, lackadaisical story that pretty much goes nowhere. It’s too bad because the cast for this movie is fantastic, with solid actors like Joe Pesci, Burt Young, Anthony LaPaglia, Catherine O’Hara, Madeline Kahn, and Ally Sheedy rounding out the supporting cast.

Holy Matrimony Synopsis: A young Hutterite boy must marry his late brother’s wife who comes from outside the community.

Review: A two-bit hustler named Havana (Patricia Arquette in a grating performance) makes off with a nice stack of cash after robbing her boss at a pop up carnival. Her partner in crime is a former Hutterite gent named Peter (Tate Donavan) who thinks that hiding out at his old homestead with his Hutterite family on the Canadian border is a good idea. Havana – who just wants to split with her half of the money – is having none of it, but forced to ride out the heat as the FBI is called in to catch them, she has to marry Peter in an awkward ceremony and must settle in the Hutterite community as an obedient, subservient wife. Her brash, ungodly ways don’t fly with the Hutterites: namely, with Peter’s kid brother Ezekiel (Joseph Gordon-Levitt) who hates her guts. And then fate steps in: Peter is killed in an auto accident, leaving Havana without the money (he hid it somewhere on the farm), forcing her to contend with what comes next: According to Hutterite law, a widow is to be married to her husband’s brother, which leaves Ezekiel in the unenviable position to take buxom, godless Havana as his bride, despite the fact that he’s still a kid. Havana agrees with the preposterous practice under the pretext that she’s only doing it for the money, but once she finds the stash she plans on ditching Ezekiel and the Hutterites. But there’s a big problem: Ezekiel knows where the money is, and he’s not telling!

A weird, misguided riff on Witness and a lopsided romantic comedy between a kid and a super hot actress twice his age, Holy Matrimony was a movie I remember enjoying as a teenager (I had a crush on Arquette: sue me), but watching it now just made me shake my head in amazement. It’s not funny or cute, and Arquette is playing a thankless role in an especially annoying way. She’s not a sympathetic character, and I had a hard time getting on the wavelength of the film, as directed by Leonard Nimoy who made a side career out of directing big concept comedies like Three Men and a Baby and Funny About Love with Gene Wilder. Holy Matrimony rivals the Melanie Griffith movie Milk Money for most inappropriate comedies with kids from the 1990’s.

Kino Lorber’s recent double feature Blu-ray release of these two titles is more or less correctly paired up. Both films, while not superb films, are presented in nice HD transfers, both in widescreen.