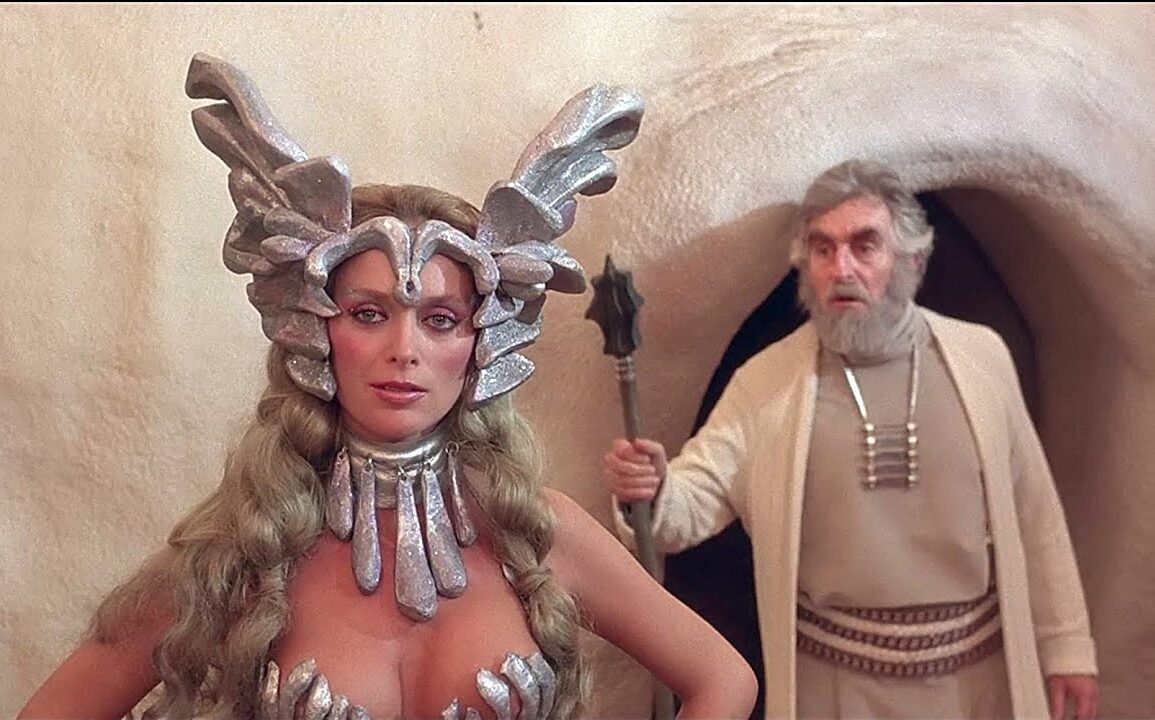 Battle Beyond the Stars (1980) Review

Though it’s essentially Seven Samurai in space, this movie excels with a terrific cast, brilliant designs by James Cameron and a killer James Horner score.

Review: I am by no means a Roger Corman aficionado. I knew Corman had started the career of many a Hollywood legend (like James Cameron, Bill Paxton, Ron Howard, Martin Scorsese – the list goes on) and he made notoriously low budget movies – that’s it. Before this flick, the only Roger Corman production I’ve watched was the ’89 The Masque of Red Death, which was pretty good. Therefore, I didn’t walk into the movie with any pretences.

Well, Battle Beyond the Stars may have been made on the cheap, but it didn’t look that way. The movie looks like a million bucks (or maybe it was two million, as that was the entire budget for the film). A lot of that has to do with James Cameron, who designed the ships. Each one is distinctive and has a structure that makes it stand out. You can’t mistake one for the other. John Saxon’s ship, the Hammerhead, is a thing to behold – it looks like it could level a planet (which, in fact, it does).

The cast is terrific. Richard Thomas, who I remember starring in the television movie, It, is serviceable as the stiff and naïve hero of the story – you feel like he doesn’t know jack, and Thomas plays it convincingly. Robert Vaughn re-plays the same role he did in The Magnificent Seven – and nobody does it like Robert Vaughn. George Peppard steals the show as the Cowboy, who is exactly as he sounds. Sybil Danning brings an awesome presence as Saint-Exmin, the Valkyrie who won’t give up. John Saxon suitably chews the scenery as the villain. However, it’s Earl Boen who was my favourite as Nestor 1 – I love smart characters, and he was definitely the brainiest of the bunch. Plus, he almost kills Saxon’s character in a completely unique and clever way. Love those Nestors.

The story is what it is. You know the story if you’ve seen Seven Samurai or The Magnificent Seven. While you would hope they would develop a more original story, there’s no arguing with a classic, and it works. Every character who joins Thomas’s quest to fight Saxon and his crew has a plausible reason to join. They all bring different things to the table, and it’s cohesive. When the characters start to get killed, it’s a little gut-wrenching as you begin to care for everyone and their motivations.

As for the pacing, let me put it this way – it’s excellent. Saxon shows up, threatens the planet, and immediately Thomas races off to find help. He’s done halfway through the movie, and then there’s a 40+ minute battle between the good and bad guys. In an era where it takes 90 minutes just to set up who the lead, villain, supporting character, and extras are, it’s a breath of fresh air.

The score is superb, but it’s James Horner, as you would expect. Like most of Horner’s scores, it’s very rousing and designed to get you excited for what you’re going to see – which it did. No wonder Corman re-used it in future movies. The makeup and costumes are serviceable, with Danning’s unique getup standing out – it not only accentuates her physical, ahem, assets, but she looks like a freaking Valkyrie come to life. How cool is that?

So, very few complaints about this movie. Every aspect of the filmmaking is elevated, and you feel like you’re watching a film with ten times the budget. As I said, you’ve seen the story before, but that’s not necessarily a negative. In today’s world of messaging and agendas, it’s nice to sit down with something familiar and get entertained. Once upon a time, that was what movies were all about.