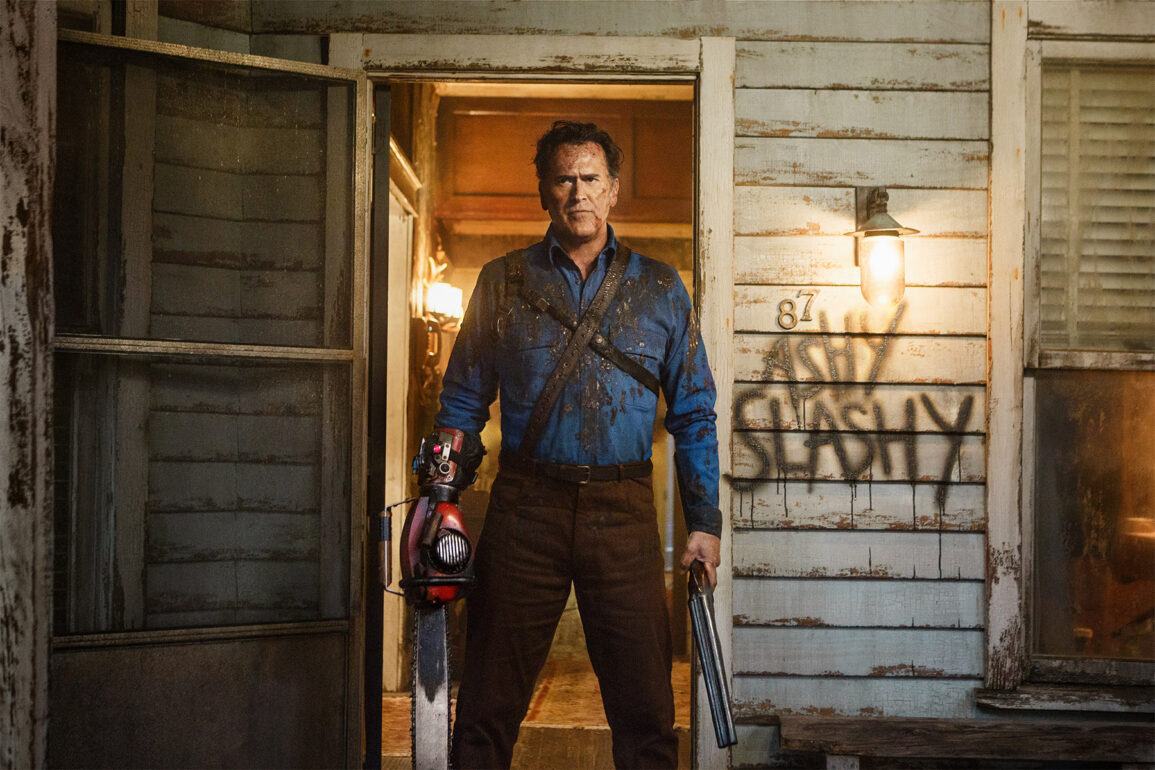 It’s great to see Bruce back as Ash, and the series ends perfectly but it’s super snarky and rarely captures the spirit of the original movies.

Plot: Ash has spent the last thirty years avoiding responsibility, maturity, and the terrors of the Evil Dead until a Deadite plague threatens to destroy all of mankind and Ash becomes mankind’s only hope.

Review: Not even Bruce Campbell thought there would have been a legit follow-up to his and Sam Raimi’s Evil Dead trilogy, which concluded with 1992’s Army of Darkness. Ashley Williams – an unbeatable, knucklehead hero who is somehow fated to save mankind from an army of demons known as Deadites that are unleashed after he goofs up by reading from the Necronomicon, otherwise called the Book of the Dead – has spent the last 25+ years living a mostly quiet life in his trailer, working at a hardware store in Michigan, but after yet another slip of the tongue, he awakens the Necronomicon again, spurring a countdown to the end of the world. A demon-possessed queen bitch named Ruby (Lucy Lawless) has been hunting Ash down for decades to collect the evil book she originally wrote, and Ash teams up with two sidekicks (his coworkers at the store) Pablo (Ray Santiago) and Kelly (Dana DeLorenzo), who keep him grounded in reality as the undead and all sorts of unearthly happenings and monstrous creatures manifest in their midst. From one calamity to the next, Ash and his buddies (and even, at one point, his old pop, played by Lee Majors) bounce around, get soaked in blood and intestines, and do their best to keep a rift between worlds from opening, which is the final stage of the Deadite apocalypse. By season 3 (this show’s final lap), Ash finds out he has a long-lost daughter, who joins the shenanigans. Eventually, Ash must single-handedly go up against Cthulu-like old gods that have been unleashed on the world, and he’s knocked unconscious, only to wake up nearly a century later to discover a world gone wild. He is the last warrior to face the final threat of humanity’s few survivors.

If you’re familiar with the three original Evil Dead movies, then you should also be aware that Army of Darkness was originally supposed to end with Ash waking up to a fresh nightmarish reality: the apocalypse. That ending was deemed too bleak and the ending was reshot to give Ash a more domesticated happy ending, and so to see that the 30-episode series Ash vs Evil Dead ends on such a rad, post-apocalyptic note makes this show’s conclusion such a treat. That said, this show pushes it’s TV-MA rating to its ultimate limit with constant profanity, crudity, and a snarky tone, which the movies never had, despite being R-rated. The premium television rule of thumb these days is to drown the content with sex, nudity, profanity, and nihilism for an insatiable audience, and on that front Ash vs Evil Dead delivers in spades. Only sporadically does the content of the show capture the spirit of the feature films, and so it’s a tough thing to recommend. On the other hand, it gives Ash (and Bruce Campbell, especially) a fairly satisfying send-off for a beloved character and franchise. Ash is less a knucklehead this time than he is an outdated, non-PC male chauvinist blowhard. He was always that, but this time he’s more streamlined. Sam Raimi directed the pilot, while a bevy of other filmmakers filled in for the remainder. Filmed entirely in New Zealand.

The complete collection Blu-ray set contains 6 discs, and all the special features from the individual sets. If you’ve waited to collect this series, now is the time to pick it up.