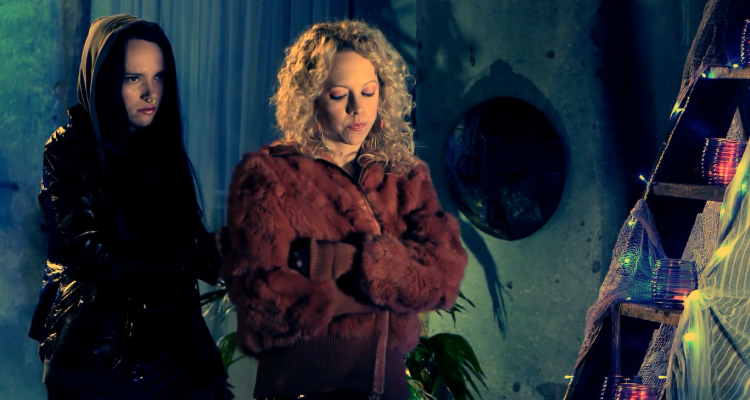 If you take it face value Apocalypse Kiss has its moments and despite how ugly and relentlessly off-putting it was, I still found myself watching it with some interest.

Plot: In this futuristic science fiction thriller, government security agent Jerry Hipple has been unsuccessfully tracking the city’s most infamous criminal The Red Harvest Killer. When two nomadic lovers, Katia and Gladys enter the city the death count rises. Obsessive-compulsive Adrian, the actual Red Harvest Killer, becomes furious that the sexy serial killing duo are grabbing media attention under his alias. Not only does Adrian attempt to reclaim his rightful reputation but he also decides to cleverly aid his detective counterpart through the case. All the while, killers and victims alike are unaware the world is about to reach an abrupt catastrophic ending.

Review: Just when you thought culty midnight movie end of the world movies had gone the way of VHS, along comes the supremely bizarre Apocalypse Kiss, which has several strange threads running concurrently, and by happenstance it also has a drastic apocalyptic ending. The story is just weird: Set in a futuristic era when Earth is on the brink of an imploding economy due to lack of food and overpopulation, it seems that everything is owned by corporations like in Blade Runner or Cyborg 2. A pair of nihilistic hookers – Katia (Carmela Hayslett) and Gladys (Tammy Jean) – mercilessly murder their latest john, and by happenstance the killing is attributed to a series of killings perpetrated by a serial killer known as The Red Harvest Killer (played by D. C. Douglas).

When the media picks up on it, The Red Harvest Killer is enraged, and his temperament worsens when the two hookers kill someone else and that too gets added to his list of killings. He baits them, while also baiting the police, who still have no clues, so that he can entrap the imposter killers and wrap everything up in a nice package. But then, something completely unexpected happens: The President (played without irony by Lloyd Kaufman) declares from a space station that he’s already left the planet in time to avoid the end of the world. Earth will collide with another planet in under 24 hours, and there’s no stopping it. The world’s population accepts this news with profound solemnity and defeat, and the world ends.

Writer / director (and composer, and other jobs) Christian Grillo shot for the moon when he made Apocalypse Kiss. The script is pretty vile and trashy with excessive cursing and unlikable characters, and exploitative, unnecessary nudity, but you can’t say he didn’t try to come up with something original. I’m not sure what it all means, so I just took it at face value and despite how ugly and relentlessly off-putting it was, I still found myself watching it with some interest. It’s definitely not for everyone, but if you want to watch something that sort of reminded me of the grungy, sci-fi VHS days, then take a gamble on this.