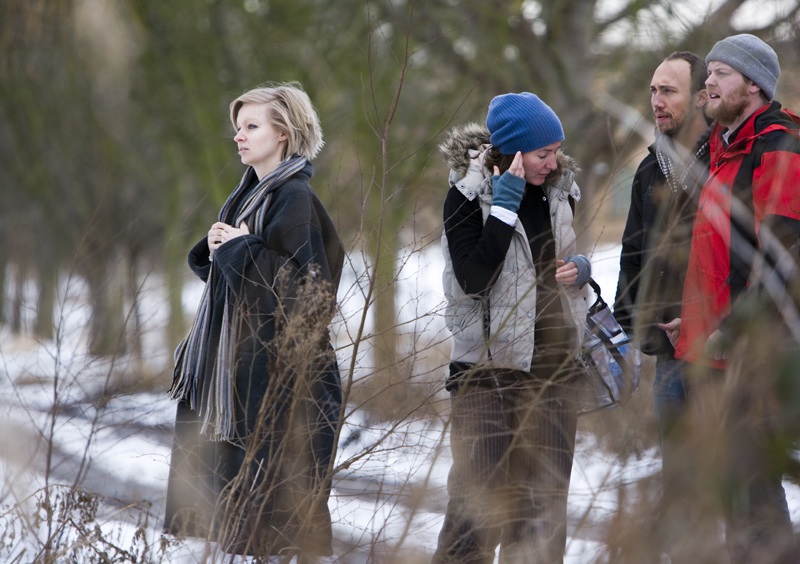 Andrew David Barker was born in Derby, England in 1975. He is an author, screenwriter, and director. Made an acclaimed debut feature, A Reckoning (2011), and his two novels, The Electric and Dead Leaves, have both been optioned and are in development.

How did the idea for A Reckoning (AKA Straw Man) come about?

In 1993, when I was in college, I made a short film called The Last Boy. It was part of an anthology film called Tales From Hell, which me and my mates made together. The Last Boy was basically about a last boy in a world overrun with zombies. It seems making a student zombie film is a filmmaking rite of passage. Anyway, we shot it on this stretch of wastelands a little way from our college – a barren, desolate landscape with one guy running around, and that imagery never left me. I love derelict buildings, places left to rot, and I always wanted to make something with that look. I do like post-apocalyptic films, always have, and so it’d certainly been on my mind for a long time to make a film in that particular genre.

So I found the location first. It was an abandoned RAF base just outside of Nottingham, an entire village left to ruin, and I basically wrote the story around that location. I worked to my limitations, and made sure the script was adaptable to whatever the location, or the elements, would throw at us, and we went for it.

You had quite the battle in getting the movie out; did it cloud your view on making movies?

The film still hasn’t got an official release. During post-production relations break down with the financers of the film and we never got to sort things out. It’s such a shame. All that work, from the  crew, and Les, and Axelle. Myself and Adam Krajczynski (DOP/Editor) edited the film over the course of a year or so, getting into so much dept… all that felt like it was for nothing once it was done.

The huge mistake we made was at the outset in the fact that we thought we were all friends going out to make a film together. No contracts were put in place upfront and therefore it all became a legal twilight zone once things started to fray. I was in such a financial hole once the film was done and was so exhausted that, to be honest, I kind of let it all go. I walked away from everything, moved out of my hometown of Derby, and began to write a novel, which became The Electric.

However, after quite a few years, I’m about to step back into the game. I’m going to make films again, so I’m basically using A Reckoning as a show reel. I’m ready.

How does it feel to get the film out there and what has been the audience reaction so far?

Well something does seem to be going on. The film seems to be being discovered, finally. After all this time it is wonderful to see people actually responding to it, and responding to it well. It does feel good and I just hope more people get to see it and enjoy it.

Leslie Simpson starved himself to achieve the emaciated look on his character. Was that your idea or his?

That was his idea. I don’t really know how far he took it, but I think he really went for it. He’s a revelation in the film. He commands that film, from beginning to end, pretty much on his own, with minimal dialogue. I can’t think of many actors that could have pulled off what he did, particularly on the budget and in the circumstances we were in.

It shows real dedication; is that what made him the right fit for the role?

When you get someone as good as Leslie, you just know you can let him go and allow him the room to just get on with it. I can’t imagine the film with anybody else now.

How did the weather affect the shoot? What was the worst day?

We shot for two weeks, and the snow came on about day 3, if I remember rightly. And man, did it come. Britain hasn’t had snow like that since, not in middle England anyway. To be honest, we just had to forge on, and it goes back to what I saying about being adaptable to whatever was thrown at us. The snow makes the film look very grand, I believe. This is a very low budget film, but the location, and the snow, give it an epic scope.

The environment in post-apocalyptic movies are very important, for obvious reasons – they are characters on to themselves, and that applies here. The weather of course made a very difficult location all the more difficult. We had no running water, no electricity, and then with the snow, the cold was quite something, and it made a dangerous location all the more dangerous. Fingers and toes were pretty much numb for the entire shoot. But that said, we had great fun. It was a really good shoot, despite the difficulties.

Were there any major influences on A Reckoning in terms of movies or novels?

Cormac McCarthy’s The Road was quite an influence. A Boy and His Dog, Robinson Crusoe, even Matheson’s I Am Legend, in terms of Robert Neville’s day to day existence, his patterns and routines of survival. Terrence Malick was in my mind, Werner Herzog… filmmakers of dark and beautiful pursuits.

What would you like audiences to take away from it?

At this stage I just hope folk get to see it and have a response to it. This film was a labour of love and I hope people can find the strange beauty in it.

You’ve penned two coming of age novels, ‘The Electric’ and ‘Dead Leaves’; for those who don’t know what can you tell us about them?

The Electric was my first novel. It’s a supernatural, coming of age story about a group of teenage kids who discover an abandoned cinema that shows movies made by ghosts. So there’s new Bogart films, and Lon Chaney films, and a comedy starring Harold Lloyd and John Belushi. I had a lot of fun creating those films. It’s very much influenced by Ray Bradbury, Stephen King and the early films of Steven Spielberg.

The book was very well received and is currently in development with Arupt Entertainment in the States, and it’s doing the rounds in Hollywood, so we’ll see.

Dead Leaves is a darker, grittier book, set in the early 80’s during the video nasty furore we had in this country during that time, about a group of down-trodden horror film fans who go in search of a copy of the notorious “video nasty” The Evil Dead. I’ve written a screenplay based on that novel that I’d really like to make.

Both books came out through a small press who have since closed their doors, so I’m currently looking for a new home for them both.

What else do you have in the pipeline?

So I’m going to start making films again. I’m starting very small. In the New Year I’m shooting a short film and hope to direct a feature later in the year. I’ve got a lot of scripts, a lot of ideas, and I’m ready to go again. The filmmaking fire has returned in a big way.