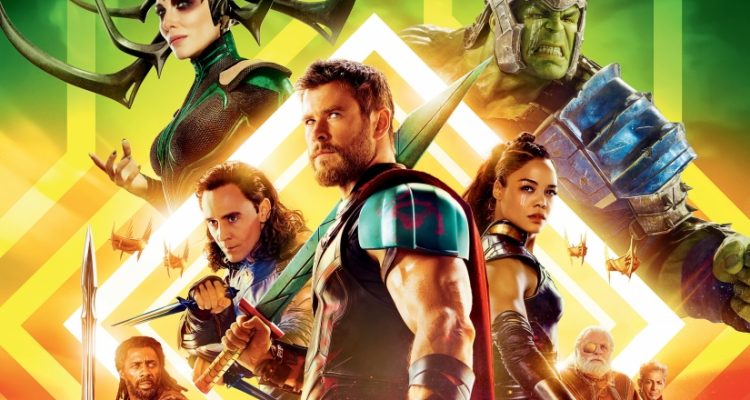 Thor: Ragnarok is vastly different from any other Marvel movie that we’ve seen so far which it should be praised for however, the wacky tone makes it all just feel like a cartoon and it’s like it think it’s funnier than it actually is.

Plot: Imprisoned on the other side of the universe, the mighty Thor finds himself in a deadly gladiatorial contest that pits him against the Hulk, his former ally and fellow Avenger. Thor’s quest for survival leads him in a race against time to prevent the all-powerful Hela from destroying his home world and the Asgardian civilization.

Review: You could tell from the trailers that Thor Ragnarok would be a very different beast form the other Thor movies; the 80’s vibe and music give it a style all of its own and is now just an out and out comedy. I haven’t really loved the past few Marvel movies; there has been far too much over reliance on stupid humour and Thor Ragnarok isn’t any different. If you are looking for any depth or drama whatsoever you’ll be disappointed as it’s a completely hollow blockbuster but is exactly what you’d expect from these kinds of movies.

Thor used to be one of my favourite Avengers and Chris Hemsworth was always very entertaining in the role however, in Ragnarok Thor is now a bumbling idiot who keeps falling over every few minutes and comes across more as a buffoon who can’t seem to do anything right.

Loki was always the best villain in the Marvel movies but now he has suddenly become a good guy with a few moments of mischief and a threat level of zero. I think am showing my age now as I just found it all really stupid and it felt like it was aimed purely at young children; people are thrown through walls, crushed and more but get up without a scratch. I know that’s par for the course in superhero movies but if no one ever seems to get hurt then where is the tension? There isn’t any; it’s all just an excuse for quip after quip where the majority of the audience laughed but I was just fed up by the time it all ended. I know I’m an old curmudgeon but it’s like Marvel thinks the audience can’t handle any kind of drama so whenever anything serious is about to happen they throw in some more dumb humour.

The movie is meant to be about the end of the world but no one ever really seems that concerned and I couldn’t help feeling there was a missed opportunity to do something more apocalyptic and special with it.

It does have some impressive visuals and admittedly I did laugh a few times; Cate Blanchett was pretty entertaining as the villain Hela but the best lines belonged to an alien called Korg voiced by the director Taika Waititi.

Jeff Goldlum is well… Jeff Goldblum but he is clearly enjoying every moment as the over the top Grandmaster and once again provides much of the film’s humour. I also enjoyed Tessa Thompson as Valkyrie who is tough but still likeable and has some nice chemistry with the God of Thunder. The Hulk is more chatty than we’ve ever seen and is once again there more for comic relief but his banter with Thor is admittedly entertaining.

No explanation is ever given as to why there is an 80’s synth score as at no point does anyone go back to the 1980’s so it was a strange choice and I especially missed Brian Tyler’s theme which remains the best Marvel score to date. Ragnarok’s music is still cool though and once again is something different and felt like a throwback to Flash Gordon.

In terms of action there are some fun set-pieces and the Thor vs. Hulk fight is definitely way up there and the colourful special effects are impressive and imaginative. Visually this is unlike the other Thor movies but feels more like Guardians of the Galaxy which I guess is a deliberate move with Infinity War coming out next year so they want to bring these characters together.

Overall, Thor: Ragnarok is vastly different from any other Marvel movie that we’ve seen so far which it should be praised for however, the wacky tone makes it all just feel like a cartoon and it’s like it think it’s funnier than it actually is.