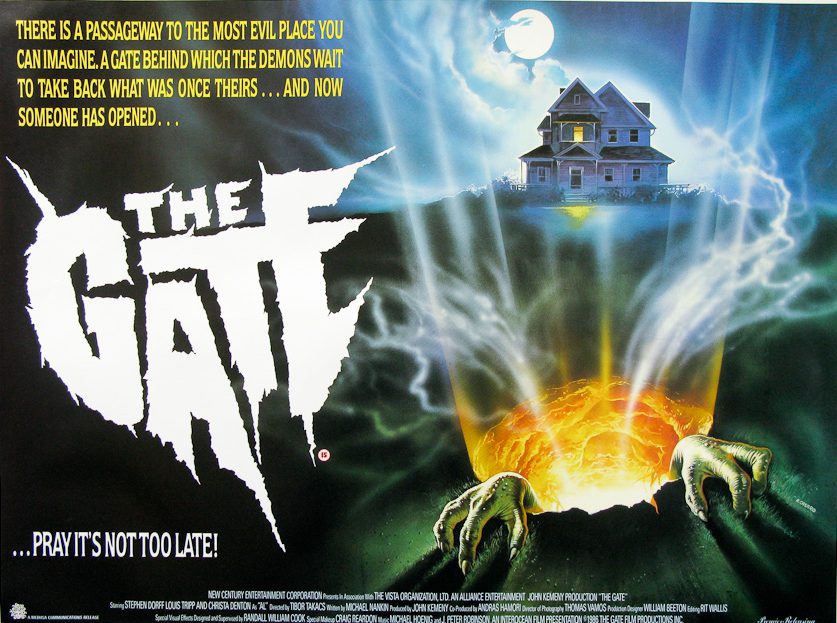 The Gate is gloriously 80’s and despite a slow first half and some dated special effects it is still a lot of fun and worth watching.

Plot: When Al (Christa Denton) and Glenn’s (Stephen Dorff) parents (Deborah Grover, Scot Denton) leave town for the weekend, Al uses the opportunity to throw a party while little brother Glenn and his friend Terry (Louis Tripp) decide to explore a hole left by a tree-removal service in the backyard. When unexplainable phenomena begin occurring, Terry — with the help of his extensive heavy-metal music collection — comes to the conclusion that he and Glenn have accidentally opened a gateway to hell.

Review: Stephen Dorff stars in this underrated gem from the 80’s which I admittedly only saw for the first time recently.

It’s sort of a fantasy/horror movie which is very silly but a lot of fun; it takes a little while for anything interesting to happen but I just get caught up in the wonderful 80’s vibe.

Dorff’s character Glenn is quite different from what you’d maybe expect from these kinds of movies; it isn’t him who wants to party and get into trouble but his sister who seems determined to be annoying. He actually wants to avoid upsetting with his parents but destiny it would appear has other plans. This makes him immediately appealing and frankly more believable as a character. Dorff could always act too even as a kid and the performances in general are decent from the supporting cast.

Like I said, nothing much happens in the first half of the movie as Glenn and Terry investigate a mysterious hole in the ground that appears to be a gateway to Hell but it’s the second half where all the craziness starts and we are blessed with some stop motion demons and a big monster that admittedly look a little dated now obviously but still kinda cool.

I love the idea that heavy metal is the key to closing the gate to Hell and was an original and hilarious concept.

Overall, The Gate is gloriously 80’s and despite a slow first half and some dated special effects it is still a lot of fun and worth watching.