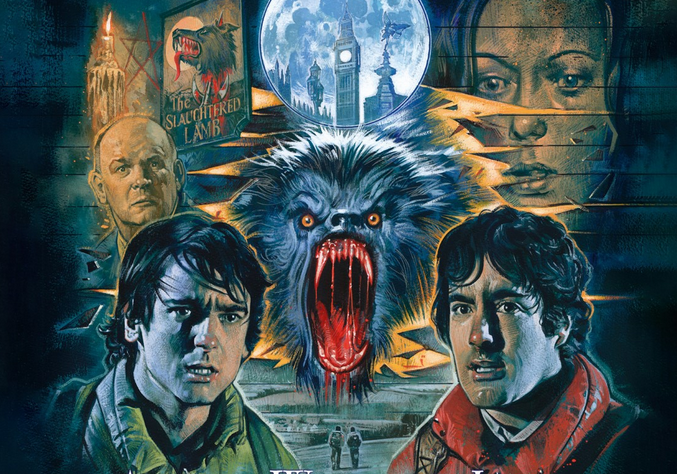 While there have been several special editions of An American Werewolf in London over the years on DVD and Blu-ray, Arrow’s new Limited Edition Blu-ray set is the ultimate edition as yet, with a jack load of special features and a hardback case that binds the disc, a book, and a fold out poster.

Plot: American tourists David (David Naughton) and Jack (Griffin Dunne) are savaged by an unidentified vicious animal whilst hiking on the Yorkshire Moors.

Review: Two young American backpackers are touring Europe, and take some time to explore the moors of England when they are both viciously attacked by a beast of some kind. The portents and warnings were there: It’s a full moon, and the locals were spooked by their appearance just moments before, and they receive and ignore ominous warning to “stay away from the moors,” but to no avail. Jack (Griffin Dunne) is savagely killed and mutilated, while David (David Naughton) survived with some scratches. The beast is killed by the locals, but the impossible seems to happen: the dead beast changes to a deceased man. Three weeks later, and David wakes up at the hospital, where he’s told that he was attacked by a crazed maniac, but he knows what he saw, and he can’t forget it. He’s soon visited by the grisly visage of Jack’s ghost (or spirit, or something), and he’s told that he must take his own life or he will perpetuate the curse of what he has become … a werewolf. David shrugs it off as crazy talk, some kind of hallucination, but it sticks with him. As a bonus, David catches the eye of his attractive nurse (Jenny Agutter), who decides to take him home for a fling, but the next night is the first full moon of the month, and David experiences the horror of his transformation and what happens when he becomes a werewolf: he goes outside and promptly slays and slashes six people, and wakes up at the zoo in the morning, with no memory of what happened. When he hears about the murders in London, he knows that Jack was right, and that he must be stopped at all costs.

A benchmark horror film from the 1980’s, and one of the most significant werewolf movies of all time, An American Werewolf in London is an odd hybrid of comedy and horror, because it’s ultimately a tragedy that is less tongue and cheek than you’d expect from writer / director John Landis, who at the time was coming off of a hot streak after Animal House and The Blues Brothers. There is indeed some levity in the film, but it’s vividly graphic in its violence (especially the aftermath stuff, thanks to Rick Baker’s incredible make-up work), and it has either one of the greatest endings of all time, or one of the worst. You’ll have to decide that yourself. In my calculation, this film features the greatest werewolf transformation ever captured on film, followed by The Howling and The Company of Wolves, with an honorary mention to the original The Wolf Man. I’ve seen this film several times over the years, and it still niggles me at how truncated it feels. There’s more story to tell here somewhere, but Landis deemed fit to end it the way he did.

While there have been several special editions of An American Werewolf in London over the years on DVD and Blu-ray, Arrow’s new Limited Edition Blu-ray set is the ultimate edition as yet, with a jack load of special features and a hardback case that binds the disc, a book, and a fold out poster. Here’s a list of the entire contents in the limited edition set: