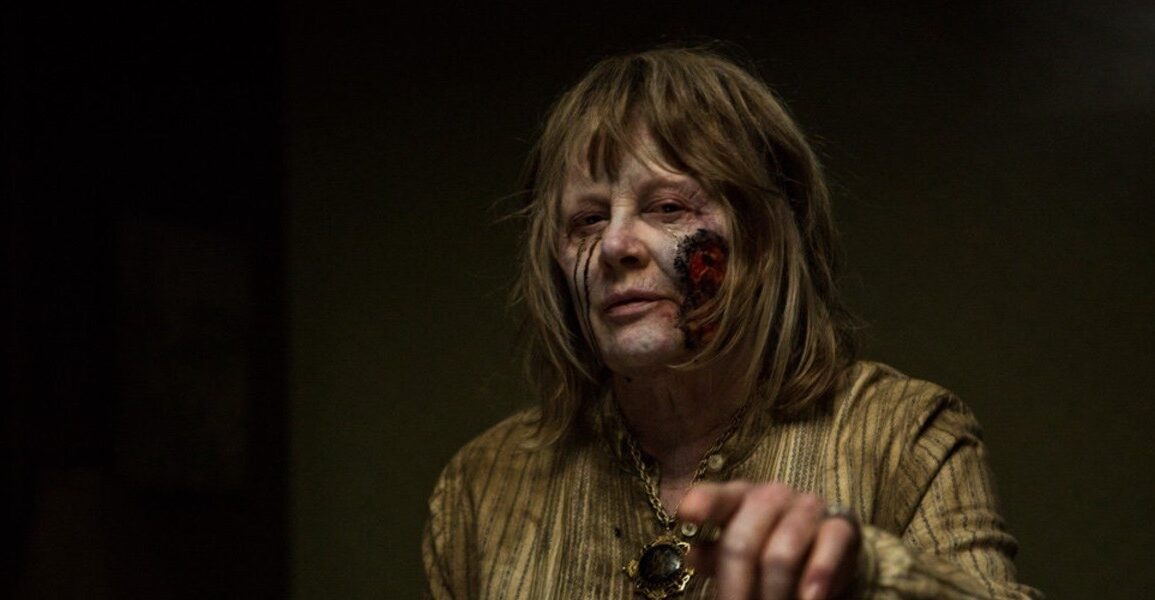 Mercy has a few good jump scares and the veteran cast does what it can with the material, but it’s a poor shadow of Stephen King’s source material.

Plot: When his grandmother becomes ill, George Bruckner and his family to her farm to take care of her.  After a bunch of weird stuff happens, George begins to realize that his grandmother may be a witch.

Review: Based on the Stephen King short story “Gramma,” there was a lot of potential for this movie to be a hidden little gem. Unfortunately, a muddled narrative and frankly poor production values really killed this film.

The cast is alright, and Chandler Riggs, he of “Walking Dead” fame, comes across as actually likeable, a feat in itself if you’ve seen any of the series.  Both Frances O’Connor and Dylan McDermott are in the movie for absolutely no reasonable explanation possible – I assume either they desperately needed a paycheck, or they wanted to work on a property associated with Stephen King.  At least veteran actress Shirley Knight has some fun with the role of the titular Mercy and chews the scenery with panache.

The real problem with the movie is it’s a hodge-podge.  It starts out very slow, it begins to build atmosphere, and you honestly believe that the movie is going to be a tight, psychological thriller, much like the short story it’s based on.  Then, about two-thirds of the way through, it’s almost like they got studio notes to amp up the gore, or they got a new writer halfway through the shoot because it becomes a lot more gory, frantic and nonsensical.  The ending is an absolute turd, I can’t actually tell you what the hell actually happened, but it was a tacked-on happy finish that left me feeling cheated.  The ending of the short story, while bleak, was better suited for the story told.

To add to the problem, this movie felt like it was made on an eighty-eight cents budget.  While the location that most of the shooting took place on was very lush and picturesque, with the main house being situated on a hill with a breath-taking view of the nearby mountains, the overall lighting is drab and bland.  That would be great if it lent itself to the atmosphere, but it doesn’t, it’s just drab because the cinematographer had no idea what he was doing or didn’t have the equipment to do proper lighting.  There’s a scene for an elderly people’s home, it literally looks like it was someone’s barn.  Then there’s the appearance of a “death wolf,” which quite frankly appeared to be a set of yellow eyes, with the vague outline of a wolf-like creature – again, the lack of budget probably constricted what the filmmakers could show, and the wolf didn’t do anything anyway, so who cares.

There are a few good jump scares in the movie, with the requisite horror soundtrack sound cues, but this just teases the audience into believing the movie is far cleverer than it actually this.  The movie’s just a mess, and the cast, for the most part, seems to realize this.  Watch this movie only if you are a die-hard Stephen King fan, and even at that, make sure your expectations are tempered.