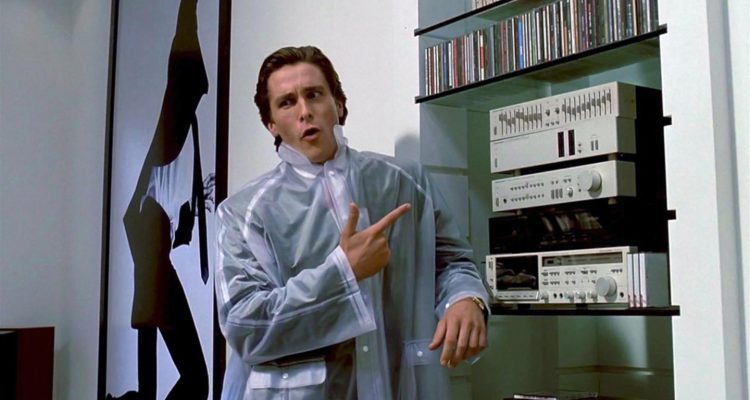 Plot: In New York City in 1987, a handsome, young urban professional, Patrick Bateman (Christian Bale), lives a second life as a gruesome serial killer by night. The cast is filled by the detective (Willem Dafoe), the fiance (Reese Witherspoon), the mistress (Samantha Mathis), the coworker (Jared Leto), and the secretary (Chloë Sevigny). This is a biting, wry comedy examining the elements that make a man a monster.

Oscar winning actor Christian Bale is one of the greatest talents working today always proving how versatile he is however, no matter how many awards he wins my personal favourite performance of his will always be American Psycho. I had read the book before watching the movie and loved it and thought Mary Harron did a phenomenal job of adapting such a tough story to the screen.

Although the tale is rather dark and yuppie Patrick Bateman is dangerously unhinged I have always found the movie to be genuinely hilarious and this is due to Bale. He shows great comic timing and the scene where he is dancing to Huey Lewis and the News before killing Paul Allen is frankly comedic genius.

I would love to see Christian Bale try his hand at more comedy and take himself a little less seriously as I think he was at his absolute best in this movie. He captured Bateman’s cold personality perfectly and could come across as suitably nuts when required but with lines like “not if you want to keep your spleen” and “New York Matinee called it a playful but mysterious little dish”.

The script is one of the best he has ever worked with and there are so many more quotable lines and it’s arguably the Bale movie I’ve watched the most.

He has so much humour in his eyes and as much as I love Bale as Bruce Wayne/Batman to me he’ll always be Patrick Bateman first and I just want to see him have more fun on screen.