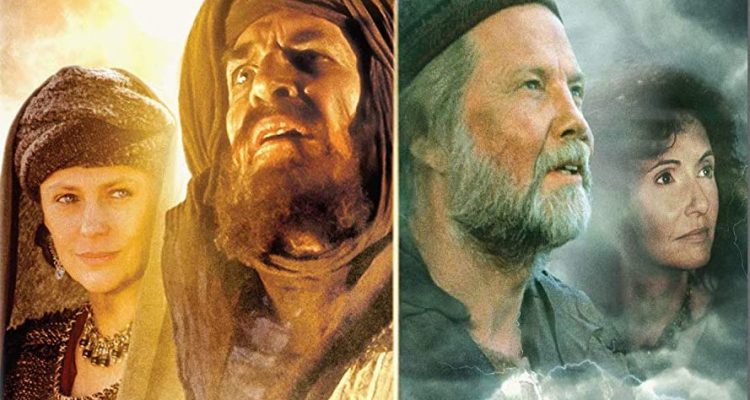 In the Beginning is the “better” movie of the pair, but both of these are pretty paltry dramatizations that take quite a few liberties from the Biblical stories. This Noah’s Ark version is a travesty.

In the Beginning Plot:

Biblical tales from the books of Genesis and Exodus, including the stories of Abraham’s devotion and the story of Moses and the great Exodus from Egypt.

An old school, sprawling two-part miniseries made for the Hallmark Channel, In the Beginning is basically a “best of” Reader’s Digest version of a handful of the most well-known Biblical stories from the Old Testament that kicks off with a recap of the creation of man by God (as told by Abraham to his people). We get a glimpse at how the heavens and the earth were formed, and then the first humans, Adam and then Eve (no nudity: this is PG stuff). We quickly get to Abraham, whose faithfulness God notices and promises him a lineage that outnumbers the stars, but because his wife Sarah (Jacquelin Bisset) is barren, Abraham is prompted by Sarah to lay with their handmaiden, who gives birth to Ishmael. Later, Sarah conceives and bears Isaac, and the two tribes of Judah split. We see Abraham and his brother Lot go their separate ways, and then we’re on to other stories, including that of Jacob and Esau and the blessing that Isaac gives to Jacob, though it was intended for Esau. Jacob’s sons are born, and unto them is born Joseph, who is sold into slavery by his brothers because of his vanity. Joseph, through a series of incredible but fated events, finds favor in Egypt and becomes the second in command to the Pharoh (Christopher Lee). Joseph’s ability to interpret dreams puts Egypt in a position of plenty over the course of seven years, and then a famine overtakes the land. Because of Joseph’s wisdom, Egypt has enough to feed everyone for seven lean years, and a twist of fate has him in a position to face his brothers again and forgive them to their faces. Later, events lead up into the enslavement of the Hebrews in Egypt, leading to another man named Moses (Billy Campbell) who grew up as an Egyptian, though he was a Hebrew all along. He is called by God to lead his people out of Egypt, but first he must confront Pharoh (Art Malik), and after his obstinacy, God brings about 10 plagues upon Egypt, resulting in a final encounter with the parting Red Sea, as Moses leads his people away from Egypt.

In the Beginning doesn’t quite inspire or awe the way it should, but amidst its episodic nature, there are several strong segments, the best being the story of Joseph, as it takes its time to tell almost the entire story, rather than skipping through it and leaving important bits out. Most of the stories gloss over tons of material to fit into a two-part film, but it doesn’t really have a thread or a structure the way it should. It’s adequately produced, but perhaps they tried to tell too much in too short a time. Kevin Connor directed.

In the Biblical story from Genesis, God floods the world as Noah rescues his family and the animals in a gigantic ark.

In a pre-deluge world, the planet has become a habitation of vile, corrupt, and bloodthirsty people, a race of men that God, the creator regrets forming from the dust. There is one man named Noah (played by Jon Voight), whom God speaks to and entreats to be the steward of God’s creations, namely mankind and all the animals of the world. In such a hopelessly irredeemable world, how is one man to take on such a task? God downloads the plans for a massive ark to build over decades to fill with animals in the event of a devastating flood, and being the faithful man that he is, Noah begins his arduous quest to build the ark, even amidst a mocking people who daily flock to heckle him. His family (Mary Steenburgen plays his longsuffering wife) stands beside him and supports his endeavor, though they’re never quite on his wavelength, as he, at times, seems to be mad. When the animals eventually start supernaturally showing up at the ark’s entrance, the rains begin to fall, and the great flood is imminent. For 40 days and 40 nights, the rains fall, drowning the world and everyone and everything in it, setting the world for the stage of a fresh beginning…

What could have easily been a slam-dunk for a Hallmark two-part miniseries turns into a woebegone exercise in weirdness and (intentional?) goofiness with bizarre mismanagement of Biblical events, such as the entire first section of the film where Noah and Lot (played by F. Murray Abraham) flee Sodom and Gomorrah, which was an event that involved Abraham and Lot, not Noah. Further discrepancies ensue. There’s a whole sequence in the last act of the film that has pirates and a peddler (played by James Coburn) trying to board the ark after the flood. It’s just outrageous. Voight, who’s usually a highly credible actor, turns in a halfway hammy performance, and he provides the voice of God as well, but his delivery as the Creator of the Universe sounds silly and more suited for a comedy. Blunder after blunder makes this Noah’s Ark a major misfire in almost every regard. And it was directed by John (Raw Deal) Irvin!

Mill Creek’s double feature DVD release of these two titles comes on two discs, but without special features. They also come with digital codes for both films. 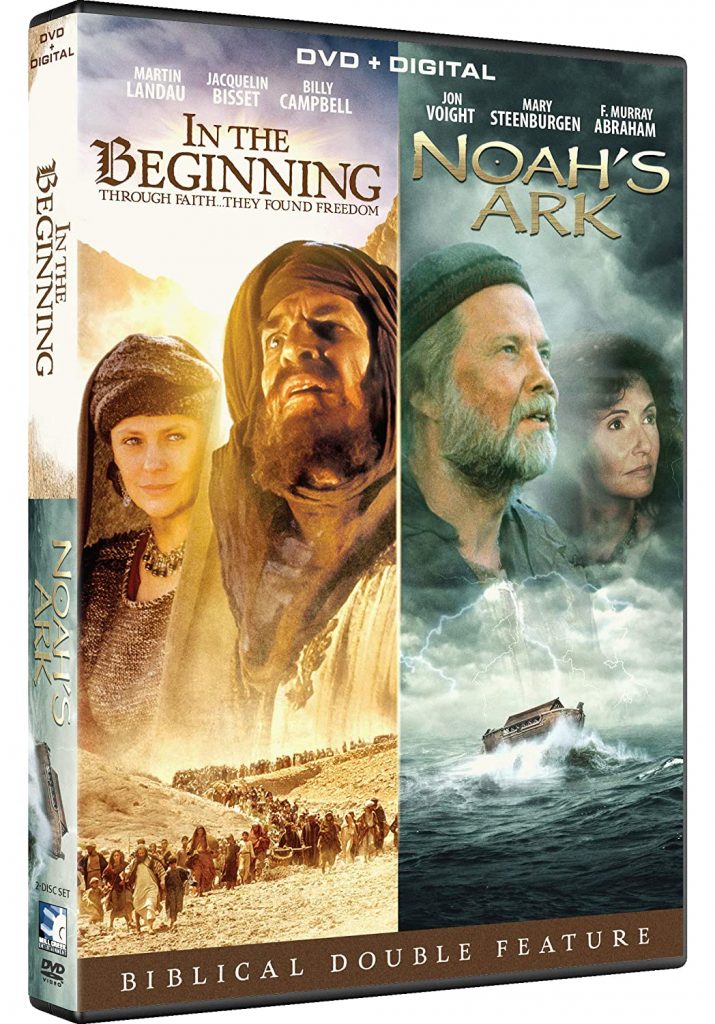