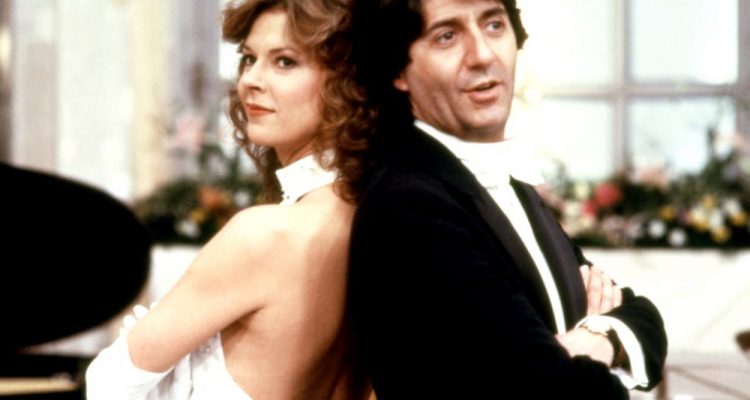 An underrated and entertaining adventure comedy which deserves a wider audience.

Plot: A housewife wins a contest and the prize is an all-expense-paid trip to Paris. En route she gets hit by a car and when she comes around she thinks that she is the main character in some romantic/thriller novels.

Review: Cathy Palmer (JoBeth Williams) almost has it all: Two beautiful children, a lovely home, and a marriage to a wealthy businessman who provides everything she could ask for … except happiness. She escapes through reading, and her favorite series of books with a female spy named Rebecca Ryan is fulfilling enough for her until she enters a contest to write a chapter of the next Rebecca Ryan installment, and then she wishes with everything she’s got to win the prize, which is an all-expense paid trip to Paris. When she wins the prize, she goes without her husband who turns out to be a selfish, self-centered partner who might actually not love or even like his wife. She travels to Paris, and on her first outing to see the sights she’s hit by a car, and when she wakes up in the hospital she’s convinced that’s she’s the fictional character Rebecca Ryan! She promptly begins a fabricated mission that has her getting into all sorts of trouble with the police, the government, and even the creator of the Rebecca Ryan novels, the befuddled Alan McMann (Tom Conti), who reluctantly joins her on her misadventures that might turn out to have some validity as assassins pick up their trail and try to kill them!

A joyously fun romantic comedy thriller, American Dreamer shares some obvious parallels to much more famous films like Romancing the Stone and The Jewel of the Nile, and it’s definitely for fans of those pictures. It’s strictly in the “PG” vein, with light action and good-humored comedy, but it features some really entertaining performances, especially by the energetic Williams, who digs her teeth into her role. It’s too bad this movie hasn’t garnered a bigger following because it’s a blast, and it has gotten better and funnier with time. Director Rick Rosenthal, who was stretching himself as a filmmaker after making Halloween II, did a fine job on this hoot of an adventure.

Kino Lorber recently released a great looking Blu-ray of American Dreamer, and it’s a nice upgrade from the DVD from Paramount about a decade ago. The picture quality and sound are superior, and newcomers will have a real delectable treat if they’re watching this disc for the first time in this format. No special features are included.