With a flavor of the ’80s, it easily feels like a kindred spirit to some of the best coming of age comedies of that era.

A bunch of teenagers graduate high school, but with only rejection letters from colleges, they create their own fake college to fool their parents, not realizing they’ve accidentally attracted hundreds of other kids to their fake college.

An average student with a truly creative and innovative mind, Bartleby (Justin Long, in a very appealing performance) continues to get rejection letters from every college he applies to, and with pressure from his parents to go to college, he and his buddy Sherman (Jonah Hill in a hilarious early role) create a website for a fake university that magically has accepted Bartleby. This puts his parents’ minds at ease, and with a 10K check from his dad, Bartleby and his buddies set to leasing and renovating an abandoned mental institution to complete the illusion. They even hire a borderline crackpot washout who used to a be an educator (played by twitchy Lewis Black) to pose as the dean of the school in the event that Bartleby’s parents wish to visit the school to speak to the dean. With Bartleby’s friends also “accepted” to the faux school, they have it easy for a day or two until hundreds of other kids in the exact same situation as Bartleby is suddenly and entirely unexpectedly show up at the campus, saying they’ve been accepted to their school, thanks to a glitch on the website. With literally upwards of a million dollars paid in tuition money from all of these dejected and yet hopeful students, Bartleby is faced with trying to milk his lie for everything it’s worth, and so he has to scramble to create a curriculum, while also navigating all the heavy responsibilities of running a school which, for all intents and purposes, is built on a lie. His nemesis comes in the form of a preppie stoolie sent by a nearby university to buy out the property to make way for a massive university expansion, and when they find out that Bartleby’s school is fake, they force him to get accreditation from the state board of accreditation or be forced to close as a result. Bartleby and his team – which also includes the preppie stoolie’s ex-girlfriend (played by Blake Lively) – have to face the state board and try to convince them that their school is indeed a real place of learning and deserves to become an accredited institution.

Revenge of the Nerds updated for the 2000’s, Accepted is leagues more engaging and hilarious than you’d expect it to be thanks to a smart script and snappy direction by Steve Pink (Grosse Point Blank), and a great set of performances by all the leads. Never pandering or stooping to stupid gross-out humor, Accepted sticks fairly safely to the PG-13 guardrails, but there’s never a moment in the movie where you feel it was compromised in favor of its rating. Star Long is a combination of early Michael J. Fox with early Keanu Reeves with his winning personality, approach, and panache, and the movie works mainly because he’s so good in it. With a flavor of the ’80s, it easily feels like a kindred spirit to some of the best coming of age comedies of that era.

Mill Creek’s new Blu-ray release of Accepted marks the debut of the film on high definition, and it ports over all of Universal’s special features from the DVD, including deleted scenes, a gag reel, a making-of-feature, an audio commentary, and more. 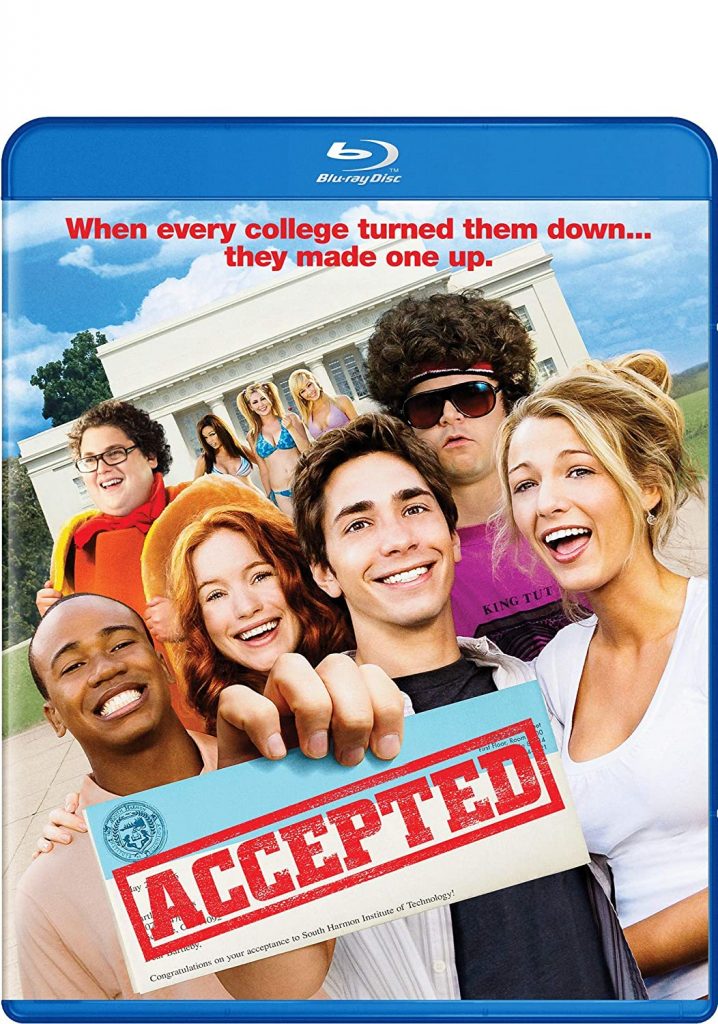