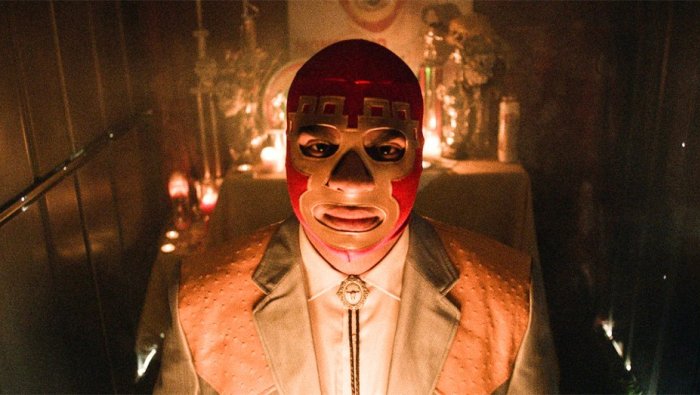 A Funny Thing Happened on the Way to an Organ Theft

“Lowlife” is gritty crime drama unfolding in three segments each with a different character’s point of view taking place one day in Los Angeles during a human organ heist.

Joseph Hernandez, Brooklyn Horror Film Festival Programmer said, “You have these chapters so you give the audience a chance to guess what’s going to happen next. Then you kind of backtrack from another perspective. It’s never exactly what you were thinking. That’s so smart.”

“Lowlife” looks like a Mexican wrestler movie because we meet El Monstruo (Ricardo Adam Zarate) a man who wears a Mexican wrestler mask all day long in public. He should be a good guy but he is working as muscle for the local crimelord Teddy ‘Bear’ Haynes (Mark Burnham). Other characters do not realize how dangerous Teddy is and how they have contributed to his crimes until they are stuck owing him something and they need to escape his clutches.

Crystal (Nicki Micheaux) is a hotel clerk who found a shady way to get a liver for her husband. She thinks her estranged daughter is a willing donor. She is wrong. The story from her point of view is titled “Fiends.”

In the second story, “Thugs” we ride with the men who are going to kidnap Crystal’s daughter Kaylee (Santana Dempsey). A black man picks up his white friend from prison and asks why he has a swastika tattooed onto his face.

Teddy is into a lot of bad business with organ theft and sex trafficking. He does a lot of intimidation to keep people who own him money in line. His character is given a lot of screen time and unsettling dialogue. His segment is called “Criminals.”

The characters in this film are very complex. You have a lot of them who are dealing with this dichotomy of they’ve done some really shitty things but then you have them on these redemption arcs in the film. Teddy is just an asshole. I want to ask you Mark how was that navigating the challenge of playing someone who had absolutely no redeeming qualities?” “The wardrobe. The tropical shorts.”

“Teddy was super-charismatic. Even when you hate the guy you still enjoy watching him because of that charisma” Hernandez said.

Actor Mark Burnham: “One thing that happened tonight that didn’t happen last night (at the IFC Theater premiere). It’s great. You all laughed when I died. I’m down, man. That’s a point of pride to me because these people exist everywhere including there’s two stories I can think of from this city in the last four or five months where someone was found in the boroughs to have been taken from somewhere else and brought here for (sex trafficking). If I can show those people to be the assholes that they are and where that will end I take it as a point of pride.”

“Thanks for laughing at all of the right parts.” Prows thanked the audience at Videology Bar.

The drama of the fear and remorse can be extreme at times, but the humorous parts snap you right back. The funny twists connected with the audience every time. When El Monstruo loses his temper we see him scream and every sound suddenly overloads to the point of silence. Then we see him minutes later looking at the damage he has done. This always provoked laughter in the audience who praised it as brilliant later.

“A low-budget necessity. It’s a trick on the audience to say we’re all having fun. We’re all jumping ahead to the aftermath. I got yelled at in one screening about the violence by an audience member. It was in Canada. To me the point of it was that if you had to sit there and see what he is doing to somebody it is terrible. I really like the idea that it is all fun and games until we are all watching the full ferocity of it” (in later scenes ), Prows said.

We don’t see any actual fights until the last scene when we see the final fight and gun battle in great gory detail. An audience member said “I found it super satisfying when you showed Teddy getting his head bashed in.”

“It’s like a payoff for the whole movie. Not seeing it then you get to see it from his point of view. And seeing El Monstruo do it,” Burham said.

“Lowlife” is available April 6 on VOD places such as iTunes, Amazon, cable on demand and in a handful of independent theaters.