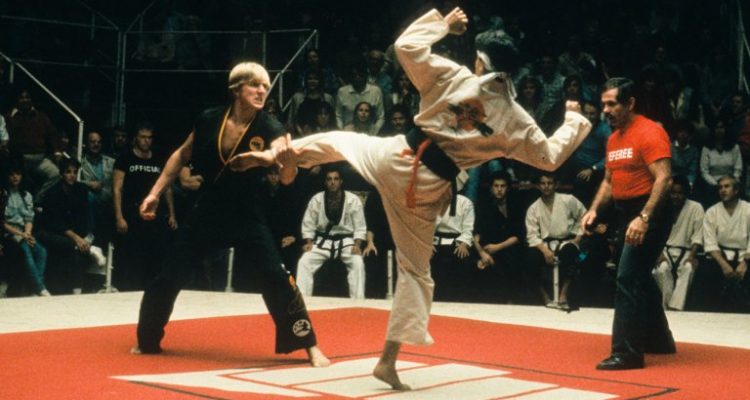 I will be the first to admit that I’m not like a lot of people my age – I didn’t grow up as a Karate Kid fan. In fact, before adulthood, I had only seen the 2nd one – which I thought was good but didn’t inspire me to go back and watch the rest. After a friend showed me the original Karate Kid, I finally understood the appeal and went back to watch the rest. Part three was unsatisfying as the villains didn’t really get the comeuppance they deserved for the hell they put Daniel and Miyagi through during the movie. The New Karate Kid was torpedoed by Hilary Swank’s annoying performance. I didn’t even bother with the remake. It’s obvious (at least to me) that parts 1 and 2 are the superior ones – but which one is the better one?

The story: The Karate Kid doesn’t have a really mind-blowing original story. Let’s face it; it’s pretty much the classic underdog story, an undersized kid from the wrong coast, out of his element who, through the wise teachings of a man who becomes his friend, becomes empowered and overcomes his adversaries. There’s no twists, no surprises. However, it works. You cheer for Daniel and Miyagi, even though it’s not surprising at the end that he wins despite a crippling leg injury. You expect it – actually, you kind of demand it. The story is clever because immediately, it appeals to experiences the audience has all felt. Every single person has felt alienated, bullied, out of their depth, forced to adjust to new surroundings or a new lifestyle. The Karate Kid is less the story of Daniel and more the story of each and every person who has ever watched it.

The adversaries: I think that this is where the movie really excels. Johnny is the exact opposite of Daniel – blonde, blue-eyed, the guy screams SoCal. Daniel is from the East Coast, Italian descent, dark eyes, and hair. They couldn’t be any more different. Johnny represents California, and his mistreatment of Daniel mirrors our hero’s own unease and fear of fitting into a culture where he clearly doesn’t belong. Likewise, Kreese is the mirror of Miyagi – where the wise Japanese teacher is the light side of karate and preaches the spiritualism, Kreese is violent and opportunistic, seeing karate as a power to hold over other people. His win-at-all-costs attitude is a direct contrast to Miyagi’s honour. Beating these two “villains” entails digging deeper than merely fighting an opponent, it’s about overcoming deeper realized fears than a normal opponent would cause.

The story: For the sequel, the narrative shifts to Japan and Miyagi’s story becomes more central to the plot. We learn about his life prior to coming to America, and this is easily the more engrossing part of the story. We had Daniel’s story in the first movie; it’s more interesting to explore Miyagi’s backstory in the second one. However, there is a bit of a fail in the story, and that’s having the climax become about Daniel. Look, I know it’s called The Karate Kid Part II, not Miyagi Part II and I know that Pat Morita probably wasn’t having any crazy karate demonstrations at his age when filming, but it seemed kind of out of place considering that the majority of the story focused on Miyagi’s conflict with Sato. To put Daniel in at the end to fight Chozen is akin to me of having Robin fight Talia Al Ghul at the climax of The Dark Knight Rises. Yeah, Robin is cool and all, but you would want the hero of the story to beat the bad guy at the end of the movie – not the second lead.

The adversaries: Sato and Chozen represent the baddies in this film, and unlike the first film, they represent the past and present of society. Even though Sato clearly has psychotic tendencies (he threatens at one point to bulldoze a village if Miyagi doesn’t accept his challenge), he still holds honour paramount in his motivations – his entire point of challenging Miyagi is over honour. Chozen meanwhile is the younger generation, and he fails to understand the honour that fuels his uncle’s actions. Chozen takes what he wants and doesn’t care about the stain those actions may have on his own or his family’s reputation. It takes Daniel, who should identify with Chozen’s attitudes due to their proximity in age, but chooses to walk the path of honour to take down his opponent and show that today’s generation is not without hope.

I feel that the original Karate Kid is tighter and tells a better story than the sequel. While it’s interesting to learn about Miyagi’s life and learn that like Daniel, he had to leave the world he preferred behind to one that he does not understand, Daniel still gets shoe-horned into the movie and ends up fighting the climactic battle. Sato seems to 180 in attitude, and while it’s explained why he chooses to embrace instead of fight Miyagi, it doesn’t forgive his previous actions. While there is nothing insanely original about the first movie, the story is better told and features better villains than Part II.