The movie’s strongest asset is star Olmos, who gives a demonic, frightening, but playful performance as the invisible demon at Valdez’s side. Olmos is so vivid and magnetic in the movie that it’s no wonder he became a star in his own right after this.

A young Mexican American man hoping to fight in World War II gets caught up in a murder rap, of which he is innocent, but public perception is fiercely against him.

Coming from humble beginnings during the 1940s, young Mexican American man Reyna (Daniel Valdez) runs with a crowd that skirts with danger. He aspires to fight in World War II, and with loving parents and siblings who look up to him, Reyna has a lot on his shoulders, including a young girlfriend who wants to marry him. But when he gets involved in a warehouse brawl with his friends against another group of “zoot suit” Chicanos, a man ends up dead, and Reyna and three of his buddies get picked up on a murder charge. Reyna is a good kid, but he has a real bad devil of a conscience that follows him wherever he goes (played by an indelible Edward James Olmos), and when the courts ready to try Reyna and his co-defendants of murder, Reyna’s only hope lies in an advocate (played by Tyne Daly) who believes his story and understands that the public opinion of “zoot suit Chicanos” is less than favorable. But when Reyna and his friends get sent to prison, hope dwindles away … except there’s still a chance for an appeal, despite Reyna’s evil conscience and how hard Reyna is becoming in prison.

Based on a stage play, and it proudly wears that on its lapels, Zoot Suit is a vibrant musical in the style of West Side Story, but not quite as grandiose or “big.” With stylish shadows and colors and interesting songs, the movie should appeal to a demographic that is familiar with its culture. The movie’s strongest asset is star Olmos, who gives a demonic, frightening, but playful performance as the invisible demon at Valdez’s side. Olmos is so vivid and magnetic in the movie that it’s no wonder he became a star in his own right after this. He was also in the stage play as the same character, so clearly the role spoke to him. Directed by Luis Valdez, who also directed the play.

Kino Lorber has reissued a new Blu-ray edition of Zoot Suit, and it comes with an audio commentary by a film historian, plus an interview with director Valdez, as well as the trailer. The high definition transfer is nice and crisp. 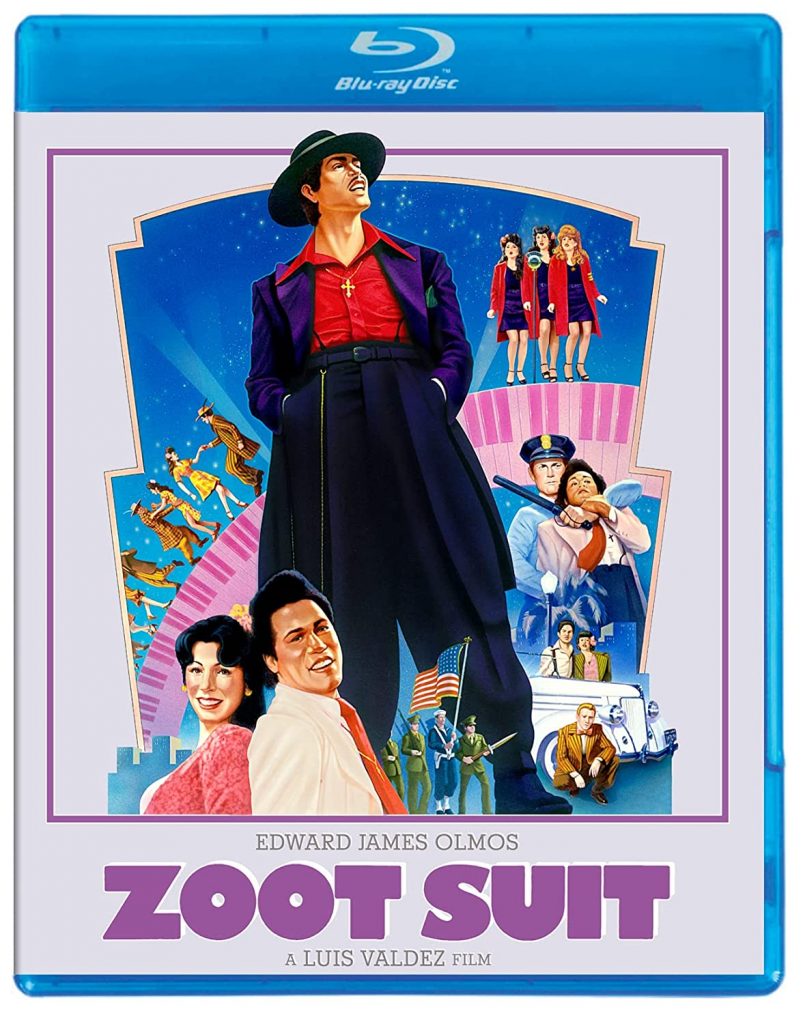