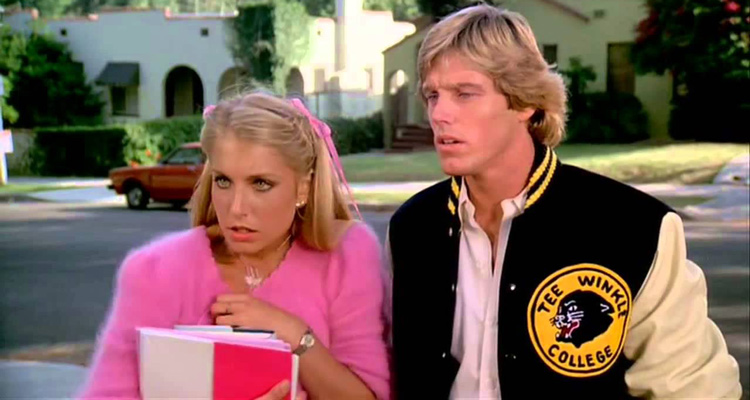 Nicely remastered and the movie is a fun watch.

Plot: A high school science nerd gains telekinetic powers after a laboratory accident and uses them for revenge upon bullies.

Review: Like Barry Allen before he became The Flash, high school senior Barney Springboro (Scott Baio from Happy Days) is at the right place at the wrong time when his science experiment goes haywire and he ends up with the extraordinary ability of telekinetic powers. Being young and horny, he uses his newfound power to lift girls’ skirts up, ripping off their tops, and giving his buddy Peyton (Willie Ames from Paradise) all the fun assistance he needs to rig a romance with the class hottie Jane (Heather Thomas from The Fall Guy), but all of the extracurricular activity puts a strain on his own budding romance with Bernadette (Felice Schachter), who is sweet on him. A big set piece at the prom (a sort of antithesis climax to Carrie) has Barney zapping away everyone’s clothes, sending everyone in the gymnasium in a harmless pandemonium.

Endlessly played on television in the 1980’s, Zapped! is a fairly tame “R” rated coming of age sex comedy with a heart of gold and a lovably dated soundtrack. Baio goes through the motions in a sleepwalking state in the film, while Ames seems to be having all the fun romancing Thomas (who uses a body double for her nude scenes). The movie could easily have gone overboard with the sleaze factor, but it never exceeds its goodwill towards its audience. A sequel followed in 1990. Directed by Robert Rosenthal.

Olive Films recently released a great looking Blu-ray of Zapped! that is superior in every way (except for the cover art) to MGM’s DVD release from about a decade ago. The film’s HD transfer is crisp, clear, and filmic, with a robust sound mix in DTS. Olive’s release should be the final word on this film.