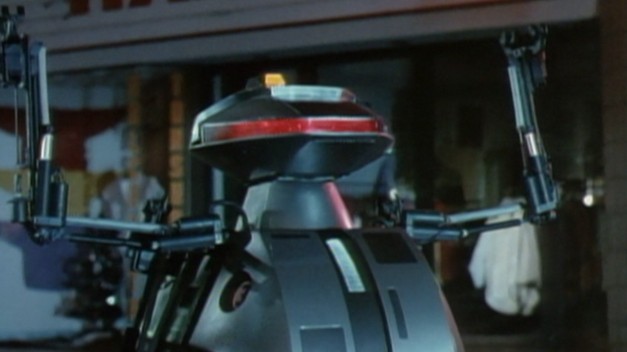 Plot: Eight teenagers are trapped after hours in a high tech shopping mall and pursued by three murderous security robots out of control.

Review: The glory days of the ‘80s exploitation film craze was never more perfectly personified than in the Jim Wynorski-directed grindhouse classic Chopping Mall. It’s Roger Corman’s knee-jerk reaction to the blockbuster hit Short Circuit, but grimier, sexier, and a heck of a lot shorter, but in its short running time (just over 70 minutes) it packs in as much gore, nudity, and explosions as the budget would allow, and the results are pretty great.

The story is gonzo nuts: A popular shopping mall installs three brand new security robots on tank wheels to patrol the mall after midnight to ward off intruders, and the robots (called “Killbots”) are armed with lethal weapons like lasers, knock out darts, bazookas, and artificial intelligence, which proves to be their most deadly accessory. On their first night after being installed, a lightning storm short circuits their hardwiring and they begin a killing spree, starting with their technicians and then the disgruntled janitor (played by Dick Miller, thank goodness). Their next order of business is to annihilate the frisky teenagers spending the night in the mattress store, and when the kids (played by an assortment of good looking actors and actresses such as Barbara Crampton, Kelli Maroney, John Terlesky, and others) realize that they’re being hunted down with ruthless aplomb, they make their way to Pekinpah’s gun store and gear up for war!

With its tight run time and go-for-broke stab for anything-goes entertainment, Chopping Mall was a staple of the VHS era, and seeing the potential in the collector’s market, Lionsgate is about to release a slew of titles from their back catalogue library, titles once released under the “Vestron” label once upon a time. Chopping Mall is the first title in the series (it’s even numbered at 1 on the spine), and it’s a hoot of a release, with a gaggle of special features worthy of a collector’s obsession. With three (!) separate audio commentaries (two with Wynorski and crew members, and one with film historians), an isolated film score, and eight featurettes, the disc has more content than a movie like this warrants, but that’s the beauty of it: It’s part of a new collector’s series that lives up to the hype. It should also be mentioned that although the release doesn’t have a “signed and numbered” number quotient on the case, the release is indeed limited to only a single pressing, so quantities will most certainly dwindle and be gone before you know it. Grab yours while you can.