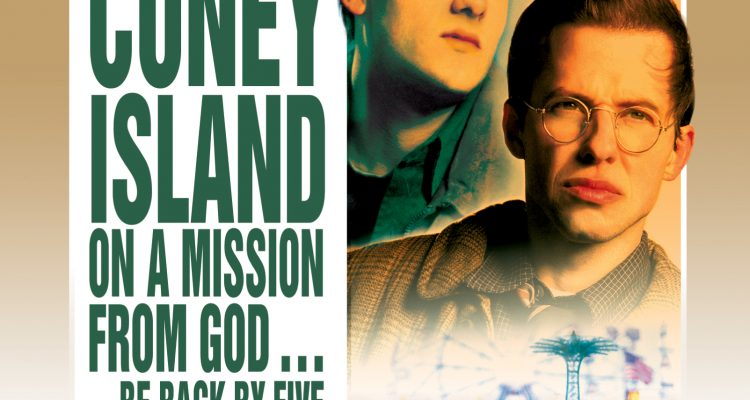 With a great sense of time and place, this film works as both a nostalgia piece and as an examination of growing up and dealing with isolation and mental illness.

Plot: Two young men (Jon Cryer, Rick Stear) who have been friends since early childhood decide to go on a trip to find a third friend (Rafael Baez) who has long since disappeared.

Review: A coming of age story centered on three boys who become fast friends as children and slowly grow apart as young adults, Went to Coney Island on a Mission From God … Be Back by Five is an affecting little film. Daniel is at first a shy kid who moves to New York with his mother, and his first friend is Stan, a kid with a bad leg. Once they start school they buddy up with the playground lothario Richie, who brags about “making it” with his nanny, which of course they believe. As they grow up they get into trouble (shoplifting, among other things), but they also stick close and progress on into high school where they begin dating girls. Daniel (played by Jon Cryer) is the smart, introspective one, while Stan (Rick Stear) becomes an alcoholic and a gambler at a young age. Richie (Rafael Baez) drifts away from them as the other two get involved with girls, and even at graduation he seems like a stranger to his former buddies. A few years go by and Richie’s kid sister is killed in a car accident, which sends Richie into a reeling depression, and it’s not until almost a decade later when Daniel (now a working jeweler) and Stan (a chronic gambler with severe debts and a failing relationship with his longtime girl, played by Ione Skye) hear whispers that their old pal Richie has been living homeless somewhere in Coney Island. They team up to track their old friend down, and over the course of a day they bond and open up wounds and eventually do find Richie, whom they realize is a severely mentally ill lost soul. How they deal with that knowledge is partly how these friends come of age.

A real gem of a movie, Went to Coney Island on a Mission From God … Be Back by Five was a passion project for star and co-writer Cryer, who collaborated with filmmaker Richard Schenkman (The Pompatus of Love). With a great sense of time and place, this film works as both a nostalgia piece and as an examination of growing up and dealing with isolation and mental illness. Barely released in 1998, the film deserves to be rediscovered.

MVD Rewind has recently released a great Blu-ray of this title. Amongst the special features is an audio commentary by Cryer and Shenkman, and a completely restored transfer of the film. Also included in a behind the scenes feature, the trailer, and a foldout poster of the film.