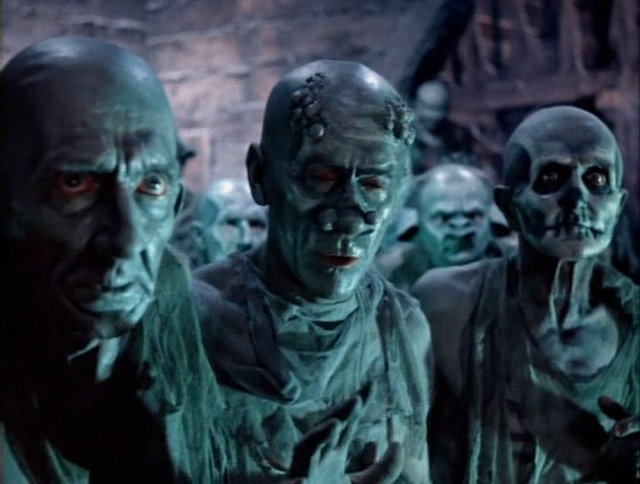 With great visual effects, an effective score and an unusual narrative, Viy is definitely not your typical horror movie and stands as a cut above the crowd.

Plot: A seminary student is forced to spend three nights with the corpse of a witch who he may have murdered.

Review: Before receiving the blu-ray as a gift from a friend, I had never heard of Viy. I looked it up on Wikipedia (oh, where would we be without that website), and it was based on an old Russian folk tale. It was also touted as the first horror film ever produced in Russia. Huh. Well, with that sort of weight behind it, this was sure to be an interesting time, wasn’t it?

Viy is not your typical horror film. Would I saw it was scary? In 2020, not so much, but I get how back in the day, it would have been terrifying. The imagery and claustrophobia in the film are undoubtedly unsettling, The narrative, though is very unusual, and it’s not the sort of film where you can go and take a pee break in the middle (in all honesty, all movies should be like that, but I digress). It’s not exactly a twisting-and-turning plot, but you can’t call anything in this one, it takes predictability and throws it out the window. You just have to stay with it and realize that in this story, literally, anything could happen.

The acting, lead out by Leonid Kuralynov, ranges from decent to excellent. Leonid himself is the anchor of the story, and with all the craziness that happens to him, I would not have begrudged him if he chose to go a little over-the-top. Instead, the opposite happens, and you can see him internalizing the insanity he is experiencing, with only short outbursts closer to the end or when he’s drunk to understand his mental deterioration.  For an actor who would have been playing this type of part for the first time, the choices he makes in the movie are genius.

The visual effects are spectacular and some of the highlights of the film. There’s a great deal of practical effects, and even when things go absolutely bonkers, there’s a sense of realism because of the way the effects are done. The camerawork and the editing are terrific, and in the few spots of real dread, ramp up the scares due to their craft. The score is really effective and ranges from moody to playful, showing the duality of the main character’s easygoing nature with the chaos that begins to envelop his life.

If you’re tired of the current jumpscare craze that has taken over modern horror movies and you’re looking for something different, you could do worse than this film. While I can’t guarantee you’d actually be scared, I think most people would be startled, intrigued and entertained after watching it.