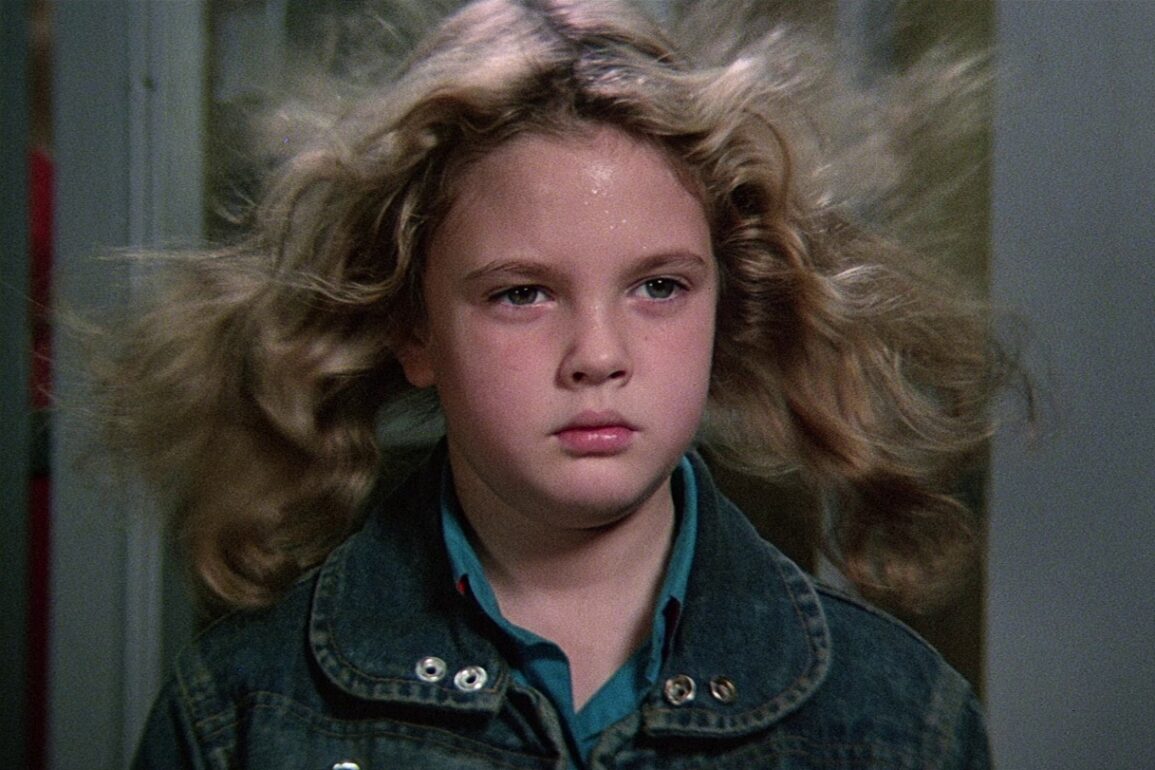 Whenever you adapt a story from another medium, the ultimate question that any curious moviegoer will have, regardless of their familiarity with the topic, is how close is the movie to the original source material?  While it should not be indicative of how good the movie is, there have been several stellar Stephen King-adapted films (The Shining, The Running Man, for instance) that have deviated from the originating stories.  In this case, it’s not just how close are they to Stephen King’s Firestarter novel – you also have to ask yourself, are they even good movies?

The first crack at the King story saw David Keith’s Andy McGee and Drew Barrymore’s titular Firestarter on the run from The Shop and the sinister Rainbird, played by George C. Scott

David Keith and Drew Barrymore: Watching this movie again, it struck me how much these two feel like father and daughter.  Maybe it’s the fact that the film starts with them on the run, and they’re with each other and not interacting with other people, but these two seem tight, like they could believably be related to each other.  Great job from both performers.

George C. Scott: Holy crap, this guy is crazy in the movie.  I know he’s not the right ethnicity, but George C. Scott is just menacing as hell, and when he’s posing as the janitor trying to be friends with Charlie, you get the creeps.  The cold-blooded way he kills the doctor is enough to give anyone nightmares.  A virtuoso performance from one of filmdom’s greats.

The Story: The story is very close to the source material and plays out pretty much as you would expect it to, if you’ve read the novel.  It takes all the great parts from the original story, and you get a real sense of why Andy and Charlie have to be on the run, as it feels like the Shop is breathing down their necks all the time.

The Fight at the Farm: Hot damn, Charlie causes a lot of carnage out at the Farm!  I think my favourite part is her toying with the one agent, who begs her not to hurt him, and she just seems to savour his terror before burning him alive.  Oh yeah, and she destroys a bunch of cars and stuff, which is always fun.

The End Sequence: Damn, Charlie blows the crap out of the Shop!  It’s always fun when the good guy annihilates the villains and continues the theme from King’s story about whether Charlie is the hero or the monster (or both?) of the narrative.  Even though it’s 1984 effects, it’s still a good time watching the Shop burn to the ground.

The Music: Tangerine Dream’s score perfectly fits this movie – the ethereal quality of the music seems to perfectly accentuate the plot and Charlie’s mysterious pyrokinetic powers.  I can’t think of a better score that could have fit this movie.

Captain Hollister: Martin Sheen’s commander of the Shop starts out with real promise, but when Andy McGee puts the whammy on him, he seems to turn into too much of a willing accomplice, to the point that you wonder if Andy is still controlling him or if he’s joined their side for some inexplicable reason.

Irv and Norma: Besides Captain Hollister, these are the two most baffling characters in the movie.  They seem wise enough, with Irv gently and maturely confronting Andy about his fibs while Norma takes Charlie to play with the chickens.  When the Shop shows up on their property and starts shooting, Norma is justifiably upset and orders them off her property.  However, at the end of the movie, when Charlie returns, the couple seems delighted that she has come back to them – what happened to the terror at Charlie making cars explode and making agents burn?  All is suddenly forgiven?  It just seems really odd.

Andy’s Ability: As much as I like David Keith as Andy, his gesture to indicate he’s using his powers (Putting his hands to his head and looking like he’s about to let a big fart rip) seems overly dramatic and unnecessary.  Also, it’s a little too convenient when he does and doesn’t use his powers.  He controls the agents to go blind (which seems to last after he leaves?) and the cab driver to see $100 instead of $1, but he doesn’t use them on Irv when he’s about to confront him about his lies?  Also, how does he control Captain Hollister for so long without continuously using his power?  And he uses the ability to have Rainbird jump off the top of the barn instead of just shooting himself?  Seems that Andy could have made things easier for himself by using his powers more wisely.

The remake sees Charlie and Andy on the run after Andy’s wife’s death, while a mysterious agent of a government institution named the Shop stalks them.

The Opening Credits: For some reason, I thought the opening credits, which gave a glimpse of the Lot 6 experiments, was done really well.  I think it really cut a lot of potentially unnecessary narrative out of the movie and captured it neatly.  Plus, the visuals were cool.

Rainbird: Well, he’s the right ethnicity this time, and Michael Greyeyes does what he can with the role.  He comes across as unhinged as his predecessor, and unlike George C. Scott, you’re not exactly sure what he will do from scene to scene.  Is he a friend or foe to Charlie?  It’s intriguing, for sure.

The Carnage: With this being 2022, the effects are great, and Charlie seems to use her powers more.  I like her destroying the girl’s bathroom at her school (after all, who hasn’t wanted to destroy a school bathroom?  They’re horrible), and the icky way she burns to death the agent in the car is great.  Her destruction of the Shop was not as climatic (in my opinion, at least) as the ’84 version, but still impressive and I loved her just tearing a swath through the place.

The Score: I don’t know why, but the Firestarter movies always seem to have a good score.  This is no different, with John Carpenter credited as one of the contributors to the music.  The score is typical Carpenter, with a lot of sleek electronic notes which perfectly accompany the action that’s taking place on the screen.

Andy McGee: As much as I liked Andy and Charlie in the 1984 version and how much they felt like actual father and daughter, that feeling was missing in the update.  Most of that needs to be laid at the feet of Zac Efron’s Charlie, who sometimes comes across as mean to Charlie.  While I felt like David Keith loved Drew Barrymore and only grew angry at her for fear of her inability to control her powers, it seems at times that Zac Efron’s Andy genuinely dislikes her daughter at times, especially before going on the run, which makes his devotion and sacrifice at the end of the movie somewhat baffling.  I will say, though, his neck-cracking to show him using his powers was better than David Keith running his hands through his hair while looking constipated.

Captain Hollister: I honestly like Gloria Rueben as an actress, but she does not work in the role of Captain Hollister.  Most of it is, I have no clue why the Shop wants Charlie – is it to make her a weapon?  To learn how she got pyrokinesis to replicate it in other, more controllable beings?  To “make her a superhero,” as she claims?  What the hell is the agenda, anyway?  Captain Hollister seems utterly confused about what she’s supposed to be doing, and her performance shows it.  Also, gender-swapping is a practice I never like.

The Shop: While we’re on the topic of the Shop and their agenda, this has to be the most relaxed group of government operatives on the planet.  Other than sending Rainbird after the McGee’s, the Shop is hardly in the movie and seems content to just let Andy and Charlie roam the country while they make plans to bring them in.  There’s no constant danger, no roving groups of armour-clad agents with futuristic tech looking for their quarry, no sense of urgency whatsoever.  If all fugitives were treated in the same style as the McGee’s, absolutely no one would end up in any clandestine government installation if this version of the Shop is in charge.

The Story: The story is just plain weird.  Part of it having Charlie’s mom, Vicki, alive at the beginning of the film, which just stalls the momentum of the story right off the bat as the film labours to establish the characters and what’s going on.  You have that peppered with Captain Hollister talking to various people, including Kurtwood Smith, who was the doctor behind Lot 6, and it really goes nowhere.  When Charlie and Andy go on the run, it finally feels like the movie is getting started, but when Andy is captured, Charlie just wanders around aimlessly and then gets a mental picture of the Shop and just goes there.  Huh?  In the end, Rainbird carries an exhausted Charlie away.  Huh?  I shouldn’t say that word so often when watching the movie, but that’s what kept happening.

It’s not close, really.  The 1984 film is vastly superior to the update.  Part of that is the ’84 movie is closer to King’s book, but also the narrative flows better, and the relationship between the main characters is better.  The 2022 movie felt like an unnecessary inclusion that brought nothing new other than casting an Indigenous man in the Indigenous role, gender-swapping the leader of the Shop and broaching identity politics when talking about a dying cat.  That alone is not nearly enough to justify remaking a movie that didn’t need to be remade.