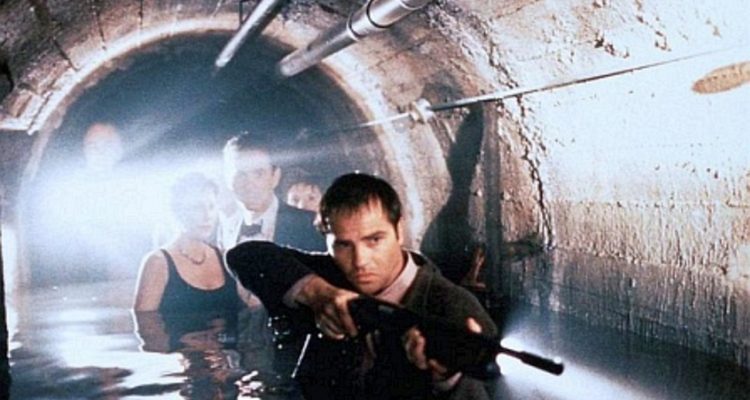 Plot: A researcher at Chicago’s Natural History Museum sends two crates from South America containing his findings, and when the crates arrive at the museum there appears to be very little inside. However, police discover gruesome murders on the cargo ship that supposedly brought the crates to the U.S. A murder soon takes place in the museum, and while investigating the murder, Lt. Vincent D’Agosta enlists the help of Dr. Margo Green, a researcher, at the museum. She has taken an interest in the contents of her colleague’s crates. Unknown to both there is a large creature roaming the museum which is gearing itself up for a benefit reception which the city’s mayor is to attend.

This is one creature film that doesn’t get talked about at all, but deserves to be.

I’ve always liked Peter Hyams as a director whether it’s films like Running Scared, Timecop , Sudden Death, Outland, and End of Days. He always brings his own style to these films which is one of the reasons they work so well, The Relic included.

The cast in this is very solid, but the one who steals this film is Tom Sizemore who’s always a joy to watch whenever he appears in a film (especially those days.)

The effects by Stan Winston still hold up to this day who was always a master at his craft and this doesn’t disappoint at all.

The story flows well and is nicely written, so it definitely keeps your interest.

Peter Hyams did a great job directing this one, especially with creating the atmosphere and mood of the setting; the tension never lets up once the creature starts its attacks.

My only problem is our lead Penelope Ann Miller, who while she does a decent job with the role, doesn’t exactly stand out amongst the cast, but that’s just me.

Overall, The Relic is a great creature film with a great cast, has a good story, has some great effects, is well directed, and moves at a good pace. Definitely check it out if you haven’t seen it! You won’t regret it!