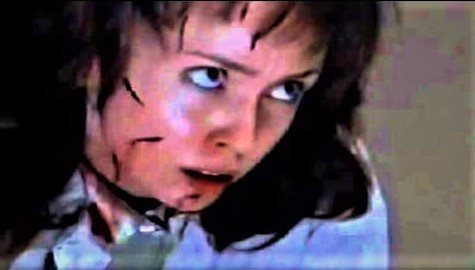 The first two stories are ruined by unconvincing, supernatural twists, and the third story follows the basic formula of the first Zuni doll story. Still, this sequel has its moments.

21 years after the original was released, Trilogy of Terror II tries to recapture the magic, manic energy that the first film brought, with three more stories told in anthology format with Lysette Anthony now playing the main lead.

Plot: The young widow of a millionaire and her lover attempt to access his fortune through nefarious means.

Review: Most of this story was quite good; Lysette Anthony was convincing as the put-upon young wife of a tyrannical old man, while Geraint Wyn Davies is gleefully unscrupulous as her lover who schemes to off the old man and collect his fortune. Most of the story is told in a drawn-out, thoughtful manner that shows the unravelling of the main characters’ plans. It’s only when we get to the third act that things take a turn for the strange.

The third act feels like something belonging to a different story and really didn’t fit with the narrative established. You had a supernatural element that just didn’t work for me with the rest of the story. Not only that, but the rats themselves were also unconvincing, large, red-eyed puppets that seemed to flop around instead of menace and maim. I get what they were trying to do – this feels very Poe-esque in execution. However, it just didn’t fit well together and wasn’t helped but the unconvincing appearance and performances by the rats.

Plot: The mother of a drowned boy conjures dark forces to bring her son back to life.

Review: Again, parts of this story worked. Lysette Anthony is decent as a depressed, desperate mother who will do anything to bring her child back. When Bobby does return to life, they do a bit of a slow-burn, not showing that there’s something not right with him at the start, but doing a gradual descent. There are parts of the story that are quite suspenseful, especially when Bobby gleefully tells his mother that they’re going to play hide-and-seek, though you know what he has in mind is anything but playful.

Where it goes sideways is again, in the third act. I don’t want to foist the blame solely on actor Blake Heron, who plays Bobby; I feel like, with better direction, the role would have been more menacing and less annoying. Unfortunately, that’s what Bobby becomes by the end – an annoying, braying brat. You aren’t scared, you just want to see him kicked out a window or set on fire and be done with it. Also, it suffered from the same problem as the last story – an unconvincing turn to the supernatural, this time with unconvincing makeup effects. Without this unfortunate turn, this middle story of the anthology would have been a lot better.

Plot: After the events of the first Zuni fetish doll story told in the original movie, the police discover the doll and take it to the Museum of Natural History, only for it to return to life and wreak havoc.

Story: I thought it was an interesting idea to make this story a direct sequel to the original; I guess it speaks to how popular the first story was. Lysette Anthony gives her best performance of the three, this time playing just an ordinary woman, just doing her job and snickering snidely at the idea that the doll could return to life. She plays terrified well here, and she effectively gives credence to the threat of the doll. One of the deaths in this one was inventive and showed the doll wasn’t a one-trick killer, which also helped to amp up the scare level.

Unfortunately, again, the story is undone in the third act. I will say that unlike the other two stories, the effects in this one were better, certainly better than its predecessor. It also helps that the camera didn’t linger so much on the doll running around, which in the first film, led to it looking preposterous and laughable. The minimized focus on the doll’s actions did help. However, the problem is, the third act is just a rehash of the third act of the first film. The doll gets the main character alone, she traps it in a box-like object, it cuts its way out, etc. Literally, the same actions were performed, verbatim, from the original. This feels less like a homage and more like a cop-out as if the filmmakers didn’t know what new to bring during the confrontation between the main character and the doll and just went back to what worked in the original.

Overall, the sequel is (surprise, surprise), not as good as the original. That’s not to say there’s no value in this movie – it has its moments, Lysette Anthony tries her best, though she lacks Karen Black’s presence from the original. If they made the first two stories more consistent (as in didn’t undo everything with unconvincing supernatural effects at the end) and didn’t just copy the third story from the original, this would have been just as good as the first entry.