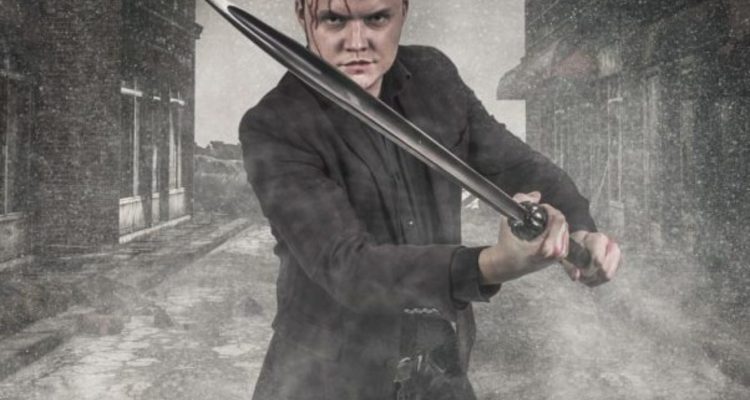 Titus Paar recently directed the Steven Seagal movie The Perfect Weapon but he’s been back on his home turf of Sweden with his new fantasy horror entitled Legend of Dark Rider. Today he stops by The Movie Elite to talk about the project.

You wrote and directed Legend of Dark Rider; what was it about the story that made you want to develop a script?

– Legend of Dark Rider is one of those films I have had with me for a very long time.
I have been wanting to make a Barbarian, Dark, Fantasy in Swedish snow-landscape for about 15 years.
It had different kinds of story arcs over the years and piece by piece started creating this whole original world.  So the world came first this time.

What made you want to direct as well as write?

– I have written every film I ever directed the past 17 years, part from my previous Steven Seagal movie THE PERFECT WEAPON. I rewrote that script but it wasn’t built on my idea, it was more of a job.
I love creating my own worlds, taking my time and making MY films from star to finish, on my terms.
I make films I want to see but doesn’t exist.

When did you know the script was ready to shoot, and what was your process of getting it there?

–  About 5 years ago I found the story I wanted to build it around.
The monster Dark Rider and turn the monster into the hero. I did’t want to do the classic: A bulky man saves a sexy woman or the world, I wanted to add a horror/black metal element to it and solve a complex mystery.
So I made the Dark Rider a haunted man without memory trying to find who made him this beast and find himself.
When the cast read it and big bearded men where crying as they read it, I knew it was ready to go.

You have a great cast including Commando’s Vernon Wells; did you have particular actors in mind when putting the script together?

– It was a great experience, I cast the film before writing the final draft of the script, so I wrote it for the actors. That made it so much easier, to be able to see and hear the actors in my head while writing it. It almost wrote itself.

Vernon is great, one of the best I ever worked with and he´s also a producer on the next chapter.
And BELIEVE ME the next chapter will be HUGE, already in talks with huge A-list actors (can´t say who yet) and it will be a multi million dollar Theatrical film.
This first chapter became one of 2016 biggest festival winner with 7 nominations and a crazy 16 wins with only 5/5 reviews world wide.
They even called it as good as Game of thrones, far beyond my expectations.

From the trailer it looks like there are some great practical gore effects; do you prefer using practical effects rather than CGI?

– It´s old-school fantasy, I want it to have that John Carpenter feel like in “The Thing”
(Carpenter loved this film)
I always do practical when I can, if there is something that´s impossible like our 100 meter snake or a huge fantasy landscape, then I´ll use CGI.
But ALL the gore in this one are practical FX by Jessica Krage and Robin Lögdö, (who also won lots of awards for this film.)
Practical stuff is just more fun is’t it? You can always spot CG blood, lazy Hollywood crap.

How was the shoot?

– The best! Should have been the worst, because it was shot all on location, during a fucking snowstorm in a real Viking village in the mountains of Sweden. The cast and crew where sleeping on the floor in a closed down locker-room, working 16 hour days and eating crappy food.
BUT we all loved it, drinking beer, there was a sauna and we really became like a big family, pushing each other to do the best work we could to create something new and exiting.
It was everything I love about making movies.

What was the biggest challenge you had to overcome?

– Location is hard man, specially in 40 below, the cold tears on you for sure, also the lack of finance since no one believed in this film but us.

How would you compare working in Sweden to working on American cinema?

– Since no one believed in this film part from us we had to finance it ourselves, so me, my wife Zanna sacrificed our savings and one of the actors Pontus Olgrim put up some well needed cash for it.
Almost everyone worked for free on the film, lost money on making the film, worked so hard and they all loved every second of it. I don´t see that happening in the states. But it´s not typical for Sweden, we have a special team, we help each other and we care about the film, not ourselves, fame or money. We believe in if we make good films it will pay off and in this case it really did. This film made everyone involved reach a few extra levels. I´m so happy to see my team, my army do well, nothing makes me happier.

Thanks very much and all the best with the film!

Thank you, please rent the film for only 3$ or buy it for only 5$ here

We love to hear your thoughts on the film so write a review and post it to contact.paarproductions@gmail.com and we´ll post some of them on our Facebook page
https://sv-se.facebook.com/darkridermovie/

AND be ready for the next chapter!