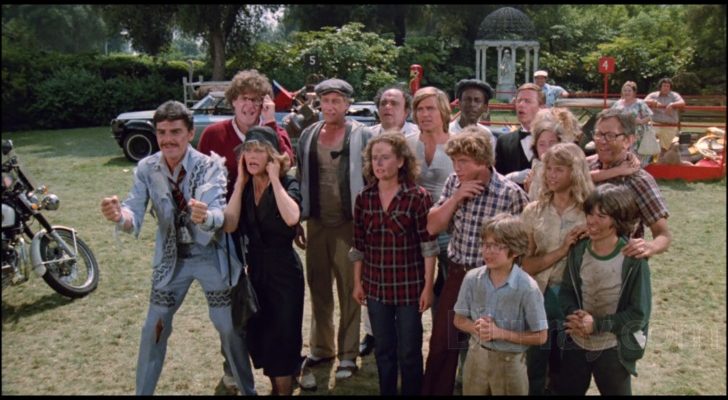 It’s a little long but it’s hilarious stuff with a great cast and a fully loaded Blu-ray.

Plot: To inherit a fortune, various addressees of a will must compete in a wild scavenger hunt to collect selected items, but cannot be simply bought.

Review: A crotchety game inventor (played by Vincent Price) dies, leaving a two hundred million dollar fortune to his relatives, but there’s a stipulation in his will that his family will have to play a game for the money, and the winner takes all. The beneficiaries are to play a scavenger hunt for one day, with a sprawling list of things to scavenge or steal (but not purchase), and teams are quickly formed to get better results. The worst of the worst is his daughter (played by Cloris Leachman) and her lawyer husband (Richard Benjamin) and their spoiled brat son (Richard Masur), and then the list of players gets slightly more palatable, like a single father (played by Tony Randall) and his three kids, two nephews (Dirk Benedict and Willie Aames), the household staff (Roddy McDowell and Cleavon Little, amongst others), and a cab driver (Richard Mulligan) who was oddly connected to the game inventor. Once the game is on, it’s a free-for-all cavalcade of adventure and comedy as each team gets into awkward and hilarious situations as they try to complete their lists before 5PM.

From director Michael Schultz (The Last Dragon, Krush Groove), Scavenger Hunt had me in stitches a few times, which is very rare for me. The movie has tons of fun cameos (there’s even one by Arnold Schwarzenegger in a funny scene), and an honest to goodness clean comedy appeal that should be treated as a real treasure these days. It’s a ton of fun, if a little too long, but with this many characters and side excursions, I can understand it.

Kino Lorber just released a great look Blu-ray of Scavenger Hunt, and it’s long been unavailable on home video since the VHS days, so definitely get your hands on this fun release ASAP. Kino’s release also includes an audio commentary by director Schultz, and new interviews with some of the actors. I was very much looking forward to watching this film, and I wasn’t disappointed.