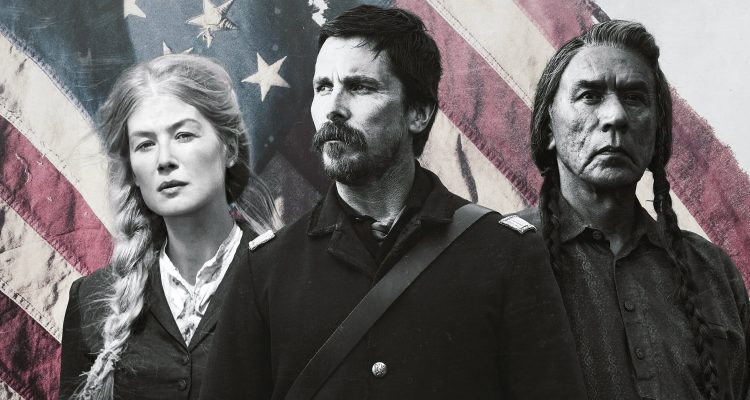 Hostiles may be too slow for some but the performances are magnetic, with Rosamund Pike giving a stellar turn as a woman on the brink of madness and Bale at his moody best. When it comes out in the next few months it’s definitely worth watching on the big screen.

Plot: In 1892, a legendary Army captain reluctantly agrees to escort a Cheyenne chief and his family through dangerous territory.

Review: Hostiles is a slowburn Western but doesn’t skimp on violence as the white man and Native Americans brutally slaughter each other in the old west. From the opening scene you will get an idea of the tone as a family is attacked by Comanches and left for dead leaving only the mother Rosalie (Rosamund Pike) alive. It’s a grim tale with few moments of levity but the cast are flawless with Pike nearly stealing the movie as a woman struggling to keep her sanity after the loss of her family.

Hostiles captures the violence and attitudes of the time with Bale’s Captain Joseph J. Blocker a particularly interesting and complex character. He’s a man who hates the natives and considers them savages and when we first see him he watches idly as his men torment a man and drag him around by horse with his family screaming helplessly. When Rosalie enters his life we see a more tender side to his nature and he slowly changes. This is the type of role Bale excels at as he gets to show various emotions and conflicts within himself; after years of brutal killing it’s all starting to catch up with him and he is haunted by the things he’s done.

Rory Cochrane gives a career best performance as Joseph’s best friend Metz who is ready to give up his life of violence as he has also seen enough bloodshed.

When the trailer came out a few weeks ago, Hostiles was described as one of the most brutal Westerns but it’s a romantic comedy in comparison to Bone Tomahawk. This is a far more contemplative film with lots of staring into the distance and pensive looks with only a few scenes of action which are admittedly quite bloody.

The cinematography is sublime with sweeping landscapes adding a nice contrast to the human conflicts going on. The score is rather minimalistic and never intrusive but it captures the grim atmosphere and transcends into a beautiful choral piece for a moving scene towards the end of the film.

As I mentioned, it is rather slow as most Westerns can be, so if you’re looking for a fast-paced and action-packed movie then this isn’t for you. It’s hard to think this will ever find an audience as it isn’t particularly commercial but it deserves to be seen by as many as possible as it is a beautiful piece of film-making.

I saw the movie as part of TIFF last night and when Christian Bale and the rest of the cast and crew came on stage they invited up a Native American Chief in full regalia who blessed us all and got us in the right frame of mind for the movie. They discussed the plight of the Natives and how things haven’t really improved for them since the time this movie was set.

Overall, Hostiles may be too slow for some but the performances are magnetic, with Rosamund Pike giving a stellar turn as a woman on the brink of madness and Bale at his moody best. When it comes out in the next few months it’s definitely worth watching on the big screen.