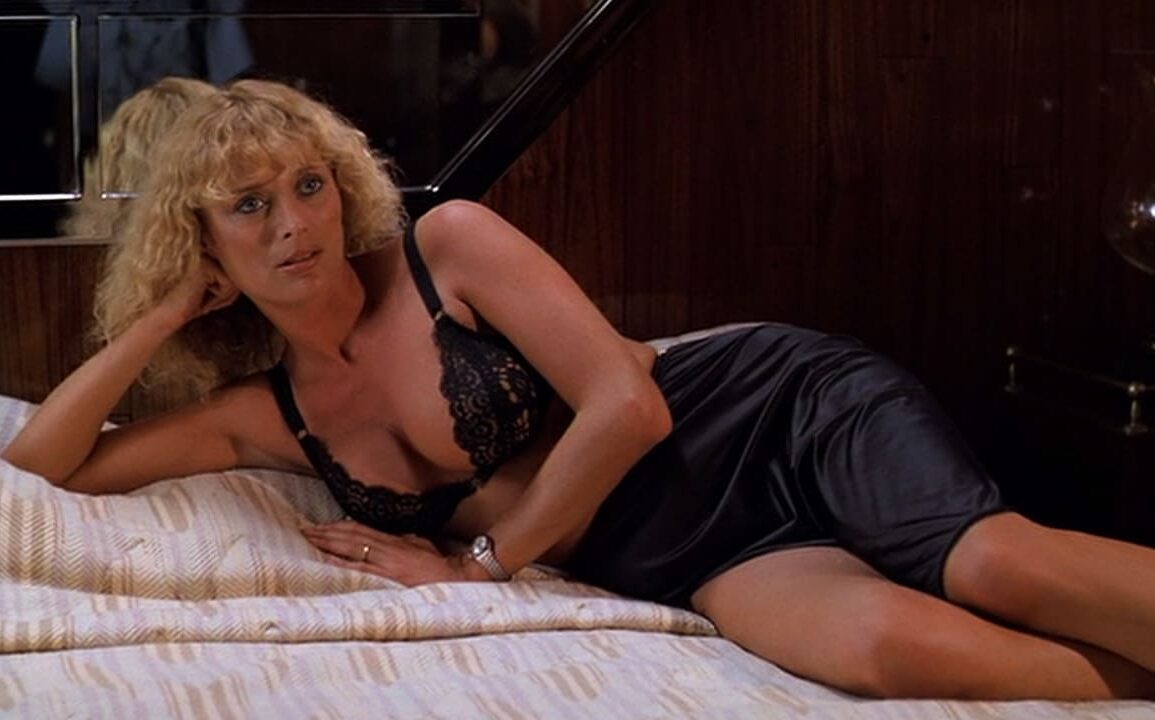 An entertaining hybrid of horror and comedy.

Plot: A married college professor decides to seduce her student, whom she hires as a handyman for her yacht. The hesitant student succumbs to his buxom professor, but their romance is interrupted by her corrupt husband and a masked murderer.

Review: Eric Brown, that kid who got seduced by Syliva Kristal in Private Lessons gets seduced by Sybil Danning this time. That guy must have been a big hit at parties. Brown plays college student Jay, and his teacher Mrs. Stevens (Danning) sees him as a potential sap to do her bidding. She invites him to her yacht, seduces him (easy prey), and then asks him to do a favor for her and her husband: Go to her husband’s mother’s mansion, scare her after dark, and run away. Sounds easy enough. The whole thing is meant to help Mr. Stevens (played by Andrew Prine) declare his old mother mentally incompetent so that he can take control of her assets, but the prank goes wrong. Instead of being scared by Jay, the old woman chases him off with a rifle, and as soon as he runs off, she’s brutally murdered by another intruder. The plot thickens. Jay is about to be framed for the murder, but he doesn’t believe that his hot teacher had anything to do with the murder of the old woman. Did her husband do it? Or someone else? Jay’s got to find out, or he’s going to spend the rest of his life regretting hooking up with his amazingly smoking hot teacher.

I completely forgot that They’re Playing With Fire is so much more than a teen sex movie. For a while, it’s exactly as advertised: horny student has sex with his pinup model looking teacher. We’ve seen that before. But then the murders start, and they’re graphic! This movie soon treads down straight-up slasher movie territory, complete with a homicidal Santa Claus scene, with creepy, masked killer living in the rafters-type vibes. It’s a radical cross-pollination of two genres I love, and since the slasher elements kick in so unexpectedly, I can’t help but recommend this to fans of both genres. I’m a sucker for ’80s teen sex movies, and They’re Playing With Fire is one of the weirdest ones out there. It doesn’t quite know what it wants to be, but I love what it is.

Kino Lorber just released a Blu-ray of this film. I remember buying the Anchor Bay DVD the day it was released a decade ago, and I’m happy to report that Kino’s Blu-ray (newly remastered in HD) looks and sounds superior to the Anchor Bay disc. It’s the perfect addition to your hardcopy library. It comes with a newly produced on-camera interview with star Danning (who’s very frank about her experiences on the film), and a trailer gallery.