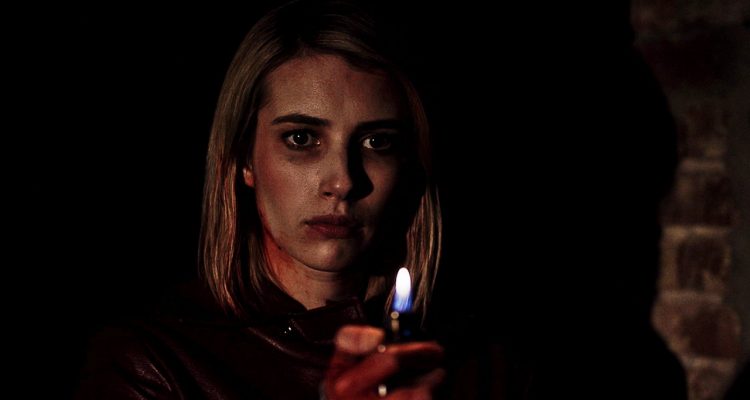 Plot: Two girls must battle a mysterious evil force when they get left behind at their boarding school over winter break.

Review: What a strange and unsettling film The Blackcoat’s Daughter is. It’s the creepiest, most alien piece of work I’ve seen since Beyond the Black Rainbow. It’s presented in three parts. We’re introduced to three young ladies: Kat (Kiernan Shipka), Rose (Lucy Boynton), and Joan (Emma Roberts). Kat and Rose attend the same boarding school, and both are left behind during the winter vacation. The school is dark and lonely, and they both hear every creak and moan that the wind induces. Somehow – though they’re not really friends – they cross paths, and not realizing that a sinister dread has invaded their space, their worlds are changed forever. Years later, Joan, who seems radically displaced one night at a bus stop, is on a one-way journey to her own self-discovery. She’s picked up by a friendly and concerned motorist (played by James Remar) and his angry, sorrowful wife (played by Lauren Holly). As they give her a ride through the dark, winter night, Joan comes to understand that these two people are somehow connected to her on a deeply personal level that only she senses. When the ride is over, her world is also shattered by her past and the sinister dread that once haunted the boarding school.

The Blackcoat’s Daughter is quite unlike any other horror film, and it is indeed a horror film of the highest order. Its structure is disarming, and while it intends to creep you out from the first frames, it doesn’t really sink its teeth into you until more than halfway through when the horror at its heart starts pumping hard. The music is weird and unsettling, and the actresses in the film convey innocence and corruption with confounding clarity. Writer / director Oz Perkins is a filmmaker to watch out for.