The Toolbox Murders is as grisly and sleazy as the nastiest slashers ever made are, and I’m going to throw in titles like The New York Ripper, Maniac, and Don’t Answer the Phone just for reference. That is to say, it’s a bona fide horror sub-classic, especially if you’re a fan of these kinds of movies.

Women are being brutally slain in an apartment complex, and the killer must be stopped at all costs!

A traumatic event several years ago kick starts a psychotic breakdown of a man who sees “sinful” and promiscuous women as a threat to life itself, and so he masks up and targets the women living in a single apartment complex for the most brutal of murders. We watch him as he drills a woman’s skull in with a bit drill. Later, he hammers two women to death. After that, it’s a woman taking a bath who gets nail-gunned to death. Police are baffled, as there doesn’t seem to be a connection other than the fact that all the murders are in the same complex, but when the killer kidnaps young and innocent teenager Laurie (Pamelyn Ferdin), things get tricky when her older brother Joey (Nicolas Beauvy) starts digging around for clues. The owner of the complex is a strange guy named Vance (Cameron Mitchell), and his nephew is a handsome and charming teenager named Kent (Wesley Eure) who calls upon Joey to help him clean up the murder scenes to make room for new tenants. Joey figures out who the killer is, which means he also knows who kidnapped his sister, but then things take a sharp left turn and things don’t quite work out they way they should …

The Toolbox Murders is as grisly and sleazy as the nastiest slashers ever made are, and I’m going to throw in titles like The New York Ripper, Maniac, and Don’t Answer the Phone just for reference. That is to say, it’s a bona fide horror sub-classic, especially if you’re a fan of these kinds of movies. The murders are sickening and cruel and all of them have a weird, voyeuristic quality to them to the point that the movie almost gets elevated to a “dirty” class. The nudity is plentiful and completely gratuitous, but for these kinds of late ’70s, early ’80s slashers / giallos that’s a plus. You can’t help but feel grimy and a little guilty after watching it (the weirdness and ickiness doesn’t stop until the last frame of the movie), so if you’re after those thrills and those feelings, get ready for the scuzzy Toolbox Murders! There’re no surprises aside from how consistent it is with its intentions. Director Dennis Donnelly is best known for being an episodic television filmmaker, but he’ll forever be the guy who made one of the grimiest “screamers” ever made.

Blue Underground’s brand new 4K / Blu-ray combo pack of The Toolbox Murders has never looked or sounded better on disc before. It’s been newly scanned in 4K 16-bit from its uncut negative, and includes a bunch of newly produced bonus features, as well as ported over features from previous editions. 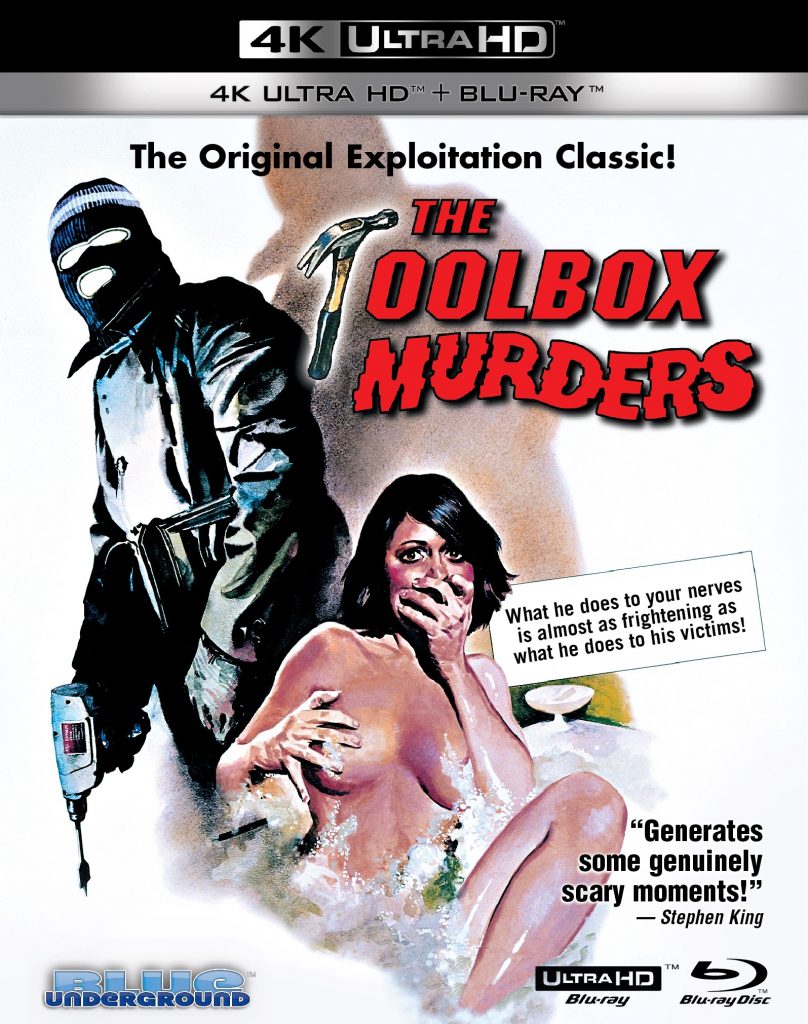