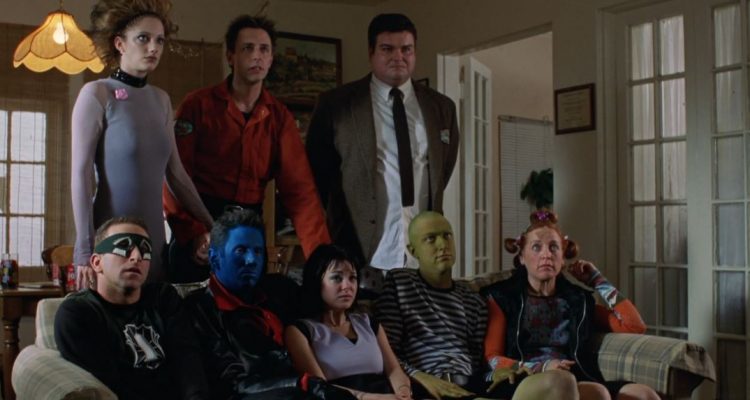 20th anniversary Blu-ray release of the unsung (2000) Craig Mazin/James Gunn superhero comedy, The Specials. Viewer’s mileage may vary. Not every joke lands, but I found the film sufficiently funny and touching.

PLOT: The Specials are the sixth (okay, maybe the seventh) greatest superhero team on the planet. Their newest member, Nightbird (Jordan Ladd) joins the team and we see the group through her eyes on the cusp of their greatest adventure: A day in the life of the group before the unveiling of a toy line featuring The Specials. The build-up to this is the various team members going through personal dramas and friction with each other: The Strobe, their upright and uptight leader (Thomas Haden Church) tries to hold the team together to maintain a more wholesome public image, undermined by members, The Weevil, (Rob Lowe) and former villain-turned hero, Amok (Jamie Kennedy). Unknown to The Strobe, his dissatisfied wife, Ms, Indestructible (Paget Brewster) is carrying on an affair with another team member. Things come to a head on the night of the presentation of the toy line. Will The Strobe be able to hold the team together, or let it be torn apart?

REVIEW: Director Craig Mazin’s 2000 superhero comedy, The Specials, makes it’s debut on Blu-ray in a 20th anniversary edition from La-La Land Records, their second Blu-ray release after their release of their 2017 Larry Cohen documentary, King Cohen. Mazin directed The Specials in 2000, and also directed the comic-book-movie spoof, Superhero Movie, in 2008. He has also written Scary Movie 3, Scary Movie 4, Identity Thief, The Hangover II, and The Hangover III, He would go on to create and write the acclaimed HBO 5-part miniseries, Chernobyl. James Gunn wrote The Specials script (in two weeks) and played Minute Man. Gunn is a longtime comics fan and is best known for writing and directing the immensely popular Marvel Cinematic Universe films, Guardians Of The Galaxy, Volumes 1 & 2, as well as the Rainn Wilson comedy, Super, and Slither. His writing on The Specials and Super has clearly informed his work on his MCU films.

While Marvel films have successfully incorporated humor into their superhero formula, actual theatrical superhero comedies were few and far between, including selected films such as, Mystery Men, (1999) My Super Ex-Girlfriend, (2006) Blankman, (1994) Batman, (1966) Defendor, (2009) The Mask, (1994) and if you really want to get obscure, The Return Of Captain Invincible (1983) or even Hero At Large, (1980) which is really a Frank Capra film in superhero drag.

A word of warning: one should not go into The Specials looking for an epic superhero slugfest. The film’s budget was low, (according to the commentaries, somewhere between $600,000 or slightly over 1 million) and FX was was used very sparingly. What you will get is a funny, intimate character-and-dialogue driven comedy about a dysfunctional superhero family, much like Marvel’s Fantastic Four. The film is relatively free of violence, but does have some frequent profanity and one scene with implied sex. One of the interesting things to me about The Specials is the theme of the corporatization of superheroes. The Boys (2019) television adaptation (and the Garth Ennis/ Darick Robertson comic book) features a similar story of a young, idealistic super heroine who joins a popular (and thoroughly corporatized) superteam and becomes disillusioned when she finds out her idols are not the heroes she thought they were. Though far more comedic, The Specials got there twenty years earlier. The film also has mockumentary interview sequences that pre-date shows like The Office and Parks And Recreation, and films by Christopher Guest. Alan Moore’s groundbreaking graphic novel, Watchmen, is also cited in the commentaries as influencing The Specials.

While I have not viewed the previous DVD release, this new Blu-ray presentation looks and sounds great. The disc includes two commentary tracks; track one is from 2005 with James Gunn and Paget Brewster, (which contains more conversational banter between the two actors) but commentary track two from 2000, which includes Director Craig Mazin, Writer James Gunn, Producer Mark A. Altman, and FX supervisor, Mojo, goes into more informative detail about how the movie was financed and made.

This new 2020 La-La Land Blu-ray edition of The Specials is produced by David C. Fein, and has a new 2K scan from the interpositive. Some nice additional extras that include Mojo’s Magic: The “Specials” Effects featurette, deleted scenes, Wedding video, behind-the-scenes photos, a new theatrical trailer in 1080p, (anamorphic, 1.78:1) and best of all, the hilarious Specials Kosgro toy commercial.  Technical specs for the feature include: 1080p High-definition widescreen (anamorphic, 1.78:1). English DTS-HD Master audio 5.1 & 2.0., and English subtitles.

The Specials was released in a brief theatrical run close to the same time as the similarly themed, Mystery Men (1999), and right before the first wave of successful Marvel films hit theaters, X-Men (2000) and  Spider-Man (2001). I don’t think it’s unreasonable to speculate the film received an unfair comparison to Mystery Men and was eclipsed by the popularity of the Marvel films. Fans will get the chance to revisit the film and hopefully new viewers will experience the goofy, oddball charm of The Specials.