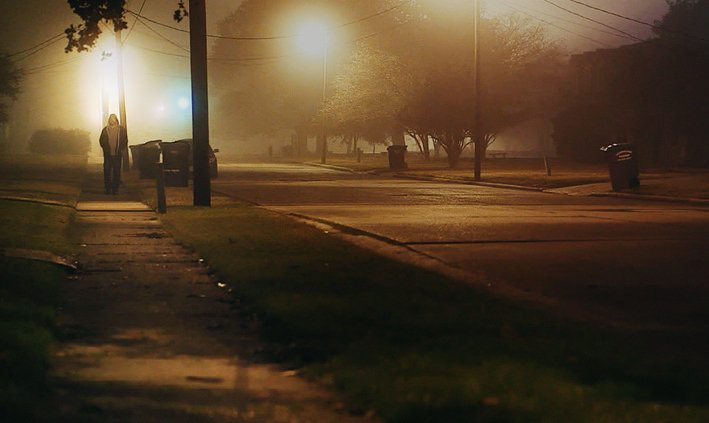 The Shelter was gripping from start to finish and the outcome was quite unpredictable; it’s the type of film that warrants repeat viewings as not everything is explained which is just how I like it.

Plot: A homeless man named Thomas (Michael Paré) finds shelter for the night within a lavish abandoned two-story house. He eventually discovers that he is not alone and the premises won’t let him leave.

Review: I was lucky enough to see John Fallon’s The Shelter recently and it has haunted me ever since; it manages to be unique which is something we rarely see these days. Michael Paré gives one of his finest performances to date as a man who “had it all” but lost it due to his own poor choices.

Paré’s grizzled features make him perfectly cast as Thomas Jacob; a man riddled with guilt after a life of heavy boozing and sex; he’s hit rock bottom and is now homeless wandering the streets trying to drown his demons in endless bottles of whiskey.

The movie barely has a supporting cast as we spend the entire story with Thomas as he goes through his mental torment and you believe every moment purely because of Paré’s performance.

There are some surreal and quite beautiful visuals at times including a scene with the spirit of his wife standing over a desolate icy wasteland which has stuck with me ever since watching the movie. Thomas’ guilt is justified and he possibly deserves what he’s going through but we wonder if this is all in his head or is he dead and in his own personal Hell?

There’s religious symbolism aplenty as Thomas is forced to face his demons leading to a quietly devastating finale. At an hour and 16 minutes it flies by with tight pacing and remains enthralling so there isn’t a single scene that feels unnecessary.

The ambiguous story doesn’t go for easy explanations so it may not be for everyone but I think I got what Fallon was trying to achieve and look forward to seeing what he does next.

Overall, The Shelter was gripping from start to finish and the outcome was quite unpredictable; it’s the type of film that warrants repeat viewings as not everything is explained which is just how I like it.