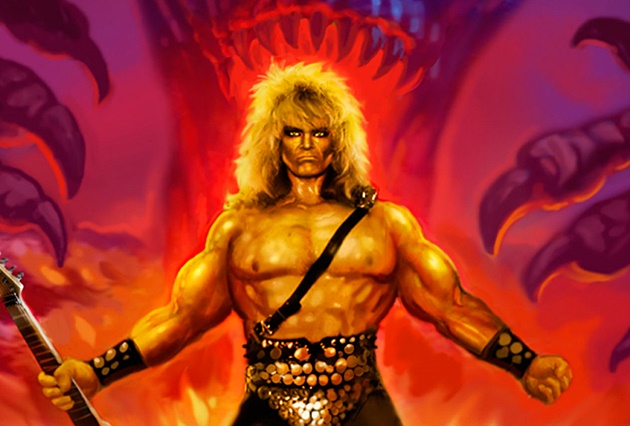 In 2015, director Ryan Wise gave us the documentary I AM THOR, an unflinching account of Jon-Mikl Thor’s comeback after having been in retirement for nearly ten years. Mounting such an ambitious attempt at stardom after having given up wasn’t an easy task. Cameras followed him and his band for nearly fifteen years and some major life-changing events occur within the context of the film. After a successful launch at Slamdance, the film continued to garner critical acclaim and has played all over the world. The film is currently available on DVD/Blu-Ray from Dark Sky Films and can be purchased on Amazon, Best Buy, or numerous other outlets. In fact, if you’re a Netflix subscriber, you can watch the film right now.

There’s also a group of fans who were introduced to Thor and his music through the motion pictures he’s starred in. RECRUITS, ZOMBIE NIGHTMARE, and ROCK & ROLL NIGHTMARE are now classics in the genre and the films have a rabid fan base.

In celebration of I AM THOR’s release (as well as the release of his latest album METAL AVENGER) Jon-Mikl launched a major tour, traveling around the world to deliver the type of show his fans have come to expect from him. Cameras captured many of these shows and thus THOR: RETURN OF THE THUNDERHAWK was born.

Thor recently chatted with us about this new endeavor.

Can you tell us about the project “THOR-Lightning Strikes (Return of the
Thunderhawk) Tour 2016”?

Yes. After the release of the I am Thor movie and the Metal Avenger album I went out on tour in North America and Europe. We captured some really amazing moments live on stage and with the fans. Along with some beautiful and exciting cinematography by film crews that I had hired to shoot each of the concerts, we felt that we had something special and wanted make it into a movie.

What made you want to put this documentary together?

I was amazed by the tremendous fan reaction to the live concert. As well, the reception to the I am Thor movie and the albums Keep The Dogs Away, Unchained, Only The Strong and Metal Avenger inspired me to make this film. There were really wonderful and electrifying moments with the fans onstage and off that were captured. Those fans who were not able to come to see the show in places like New York City, Chicago, Sweden can watch this film in the movie theater and later on DVD/Blu-ray, Netflix in the comfort of their own home.

Why was now the right time for it?

Yes it feels like the right time. There has been a lot of demand for more Thor movies and albums. I’m not one to wane.  I have numerous films and recording projects in the works. I like to keep active.

What can fans expect from it and what’s been the initial reaction from them?

The reaction to the trailer has been excellent. I am getting a barrage of social network excitement. This is an opportunity for the fans to be part of a Thor film. Those who are Rock n Roll Nightmare fans or fans of other Thor movies can be part of this. We have already made a substantial investment into shooting the movie. Now that we are in post, there is not a whole lot to raise. We have already had offers from film companies to invest into the post production and complete the film but we thought we would give the fans the first opportunity to be involved.

You retired for a few years but came back and started touring again; what’s it
been like to be back on stage?

I’ve never completely retired. I’m always writing songs or working on movie scripts. But there is nothing like being live on stage and feeling the energy from the crowd.

Did you miss it?

Yes. What I missed was performing songs for the fans. The roar of the crowd and having them sing along with the songs is a high that is unparalleled.

For those who don’t  know, what made you want to do a Kickstarter campaign and
what are you wanting to achieve from it?

I have never been involved with crowd funding before. I really wasn’t sure I wanted to move forward with it. I have seen some great projects fail on kickstarter but went on to become a huge success with private funding. I thought I would give it a try. As I said before that many fans expressed that they would like to be involved with a Thor movie. So this is an opportunity to do so.

You mention on the Kickstarter page that you want to add some more dramatic
scenes between the live footage to give it that extra fantasy look.

I was a big fan of the Led Zeppelin  movie “The Song Remains The Same”. I wanted to incorporate some fantasy and horror scenes as a prelude into the songs. There is a scene where I transform into a monster before the song “Creature Feature”.

What did you have in mind? How have you found crowdfunding so far?

Its definitely a horse of a different color. Much different than private funding. There are many projects appearing every single day on kickstarter vying for the investor’s attention. Maybe we could have went with Indiegogo or one of the others. I am a novice at this type of funding. But we are getting a very good reaction and its causing other offers to come in for other projects. In addition it has been drawing attention to other films and records that I have done. I want to have the fans involved but I am not twisting their arms to make the pledge. They have to want to do it. Whether it gets fully funded or not with kickstarter, its a win win situation. As I said, we have proposals from companies that want to fund this movie. So it will be completed one way or another. But if the fans become investors there are some ultra awards. They will be on the Ride of The Chariot to Asgard.

I met Ryan Wise and Al Higbee sixteen(16) years ago in Seattle. They saw the concert and were impressed enough to want to make a documentary. The movie was made through their lens. I feel that they did a wonderful job. They are super talented film makers. Return of The Thunderhawk is a totally different film on its own. It is not a sequel to I am Thor. It is my artistic expression.

Any plans to make any other movies in the near future?

Yes I have 5 movies in the works. Horror, Science Fiction and more. I am working on a Rock Opera with a Swedish band “Thundermaker”.

Check out the Kickstarter page: https://www.kickstarter.com/projects/2137275895/thor-return-of-the-thunderhawk-world-tour-2016?ref=project_share