Kirk really, truly is a beautiful young woman, but she’s far too pretty for this grueling film, and Marshall tries real hard to navigate his affection and attraction to her through a mediocre story and script. I wanted very much to like The Reckoning, and while it’s a mite more than a misfire, it’s a curious thing to see, if only for the fact that we finally get to see Kirk in what may end up being her only starring role … unless she and Marshall try it again.

An innocent woman in the Dark Ages is accused of being a witch by a witch finder and a spiteful land baron.

As if the Dark Ages weren’t bad enough with the black plague, killing millions, there’s a sense in the air that someone – or something – must be blamed for all the anguish, and so the spiteful eyes and suspicious hearts of the populace of England turn to sniffing out so-called witches in the land, which invariably falls on the heads of many innocent women everywhere who may be a little too pretty, too beguiling, or just too strange for the regular folk. A beautiful woman (too beautiful for the Dark Ages if you ask me) named Grace (Charlotte Kirk, a relative newcomer who comes with a great deal of controversy, but whose passion project this seems to be, as she also co-wrote it) has just dug a shallow grave for her humble farmer husband, who committed suicide after discovering he had the plague. Grace is now a too-beautiful single mother with a newborn baby and a piece of land to pay rent on, and with virtually no means but her beauty to offer to the world. But the world is a cruel and heartless place, and the land baron (Steven Waddington from The Last of the Mohicans) angles in on her, seeking her body as payment on her rent, and when he attempts to rape her, she spurns him, sending him into a rage. He rushes into the nearest tavern, inciting the dimwitted denizens into calling Grace a witch, instigating the arrival of the infamous witch finder Moorcroft (Sean Pertwee) to ride into town with his assistant, looking to quickly condemn and burn yet another “confessed” witch at the stake. But Grace, despite her stunning beauty and grief, will not confess, leading to a four-day torturous ordeal where she is stripped bare, kept awake, degraded, and mutilated, until the witch finder all but becomes exasperated with her. Finding the will through startling demonic visions and memories of her husband and hope to save her child, Grace must bring a terrible reckoning upon the land baron and the witch finder, but it will be hell on all of them.

A handsome looking production shot in Hungary, The Reckoning is the sort of vanity project that Hollywood used to mock and pan in the days of John Derek’s endeavors with his sexpot wife Bo Derek (Tarzan, the Ape Man, Bolero) or when Pia Zadora was making films like Butterfly and The Lovely Lady that were financed by her billionaire husband Meshulam Riklis, or even when Renny Harlin made back-to-back mega flops Cutthroat Island and The Long Kiss Goodnight with his then-wife Geena Davis, and it’s been years since we’ve seen something like this on such a scale. Director and co-writer Neil Marshall, whose highly accomplished work in previous films Dog Soldiers, The Descent, and Doomsday captured the eyes and heartbeats of an entire genre fan base got mixed up with ingénue and current media sensation Kirk, who has been lauded for a great many things, all relating to having non consensual sex with major studio moguls, and thereby toppling empires and so on and so forth. It’s fascinating that Marshall and Kirk became a couple and subsequent collaborators on The Reckoning, and you can see the complete and utter sincerity of their efforts to both plunge Kirk headfirst into leading woman territory in a role written just for her and for trying to get Marshall back into more personal features after years of high-end quality TV work and the fiasco that became his Hellboy movie. The Reckoning is such an earnest attempt at capturing the dark magic of supernatural period-set dramas that it obviously hopes you haven’t seen or remember better movies cut from the same cloth like Stuart Gordon’s The Pit and the Pendulum, Ken Russell’s The Devils or even Christopher Smith’s Black Death. Marshall and Kirk have created a truly sensational, but highly clichéd and head-slappingly fetishistic ode to Kirk’s own visage and body that it really does take you back to those days of when Bo Derek dripped honey on her body in Bolero or whatever else filmmaker / star lovers used to do to showcase the beautiful young star’s talents or assets for the audience’s pleasure or amusement. Kirk really, truly is a beautiful young woman, but she’s far too pretty for this grueling film, and Marshall tries real hard to navigate his affection and attraction to her through a mediocre story and script. I wanted very much to like The Reckoning, and while it’s a mite more than a misfire, it’s a curious thing to see, if only for the fact that we finally get to see Kirk in what may end up being her only starring role … unless she and Marshall try it again. And why shouldn’t they? 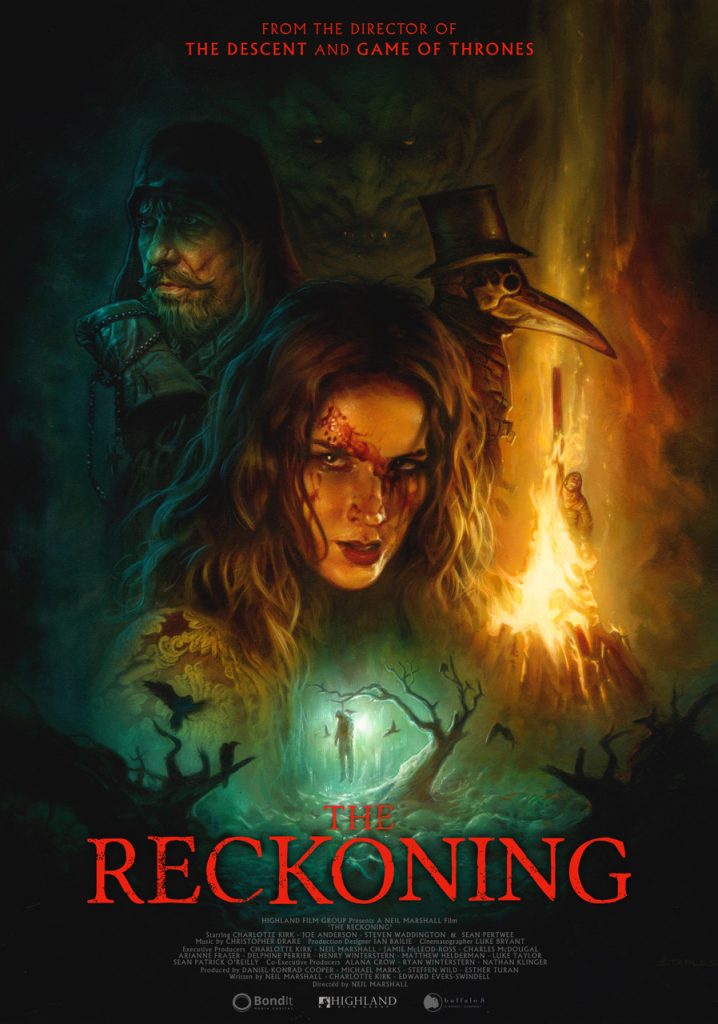