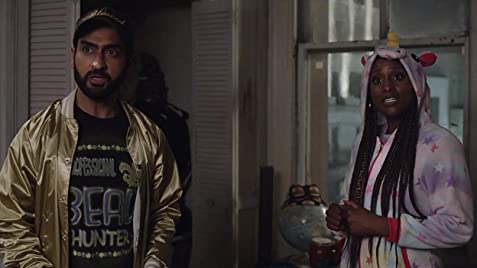 The Lovebirds doesn’t offer anything new, but the leads are charismatic, and there were a few genuine laughs in the film.

Plot: A newly broken-up couple finds themselves embroiled in a mystery involving a mustachioed killer.

Review: Modern comedies are touch-and-go for me. Most of them lack the cleverness of earlier comedies, and I’m just not that much of a fan of today’s humour, which seems generally obnoxious and mean-spirited. Give me Abbott and Costello or the Marx Bros., and I will laugh all day. Even Steve Martin or Chevy Chase will put a smile on my face. Seth Rogen – eh, not so much.

So, I had a lot of trepidation about The Lovebirds, even though the trailer looked good.  Did it deliver? For the most part, yes.

Let’s start with the story.  It wasn’t bad, I’ve seen worse, I’ve seen better. There was a part at the end that was contrived that made me mutter to myself, but otherwise, it was solid. I didn’t really guess a lot of what was going on, and it kept me intrigued. I will say that even though it clocked in at 97 mins, it felt shorter than that – in fact, it felt like we got to the end within an hour. I guess that’s a good thing, though.

The leads were fairly charming (though their constant bickering did get annoying – this was even pointed out by one of the other characters).  There were times when I thought both characters were flat out mugging (especially during an interrogation scene), that I guess they thought was funny, but it fell flat. Overall though, both Kumail Nanjiani and Issa Rae were engaging, it seemed like they may have been a real couple (which helped), and their comedic timing hit more than it missed. Plus, bonuses for Paul Sparks, who plays a heavy really, really well (don’t believe me?  Check out Season 2 of Castle Rock).

The actual comedy bits were generally good, with no real scenes making me roll my eyes or squirm with discomfort. You can always tell the quality of a comedy from how many laughs there are in the actual movie outside of what you see in the trailer, and this one had a few.  They were smart to do one thing really well – in these types of movies when characters are pushed out of comfort zones, the character is either unbelievably bumbling or suddenly finds themselves more skilled than initially thought. This duo went more for the bumbling side, but not to the point that it was corny.  They felt like real people, and how they reacted to the situations in the movie is how real people would respond.

There isn’t much more to say about this movie.  The costumes, cinematography, and score are not particularly memorable, but nothing got in the way, either. This was just a competent, solid, albeit unspectacular time waster that was elevated slightly by the enthusiastic performances of the leads.