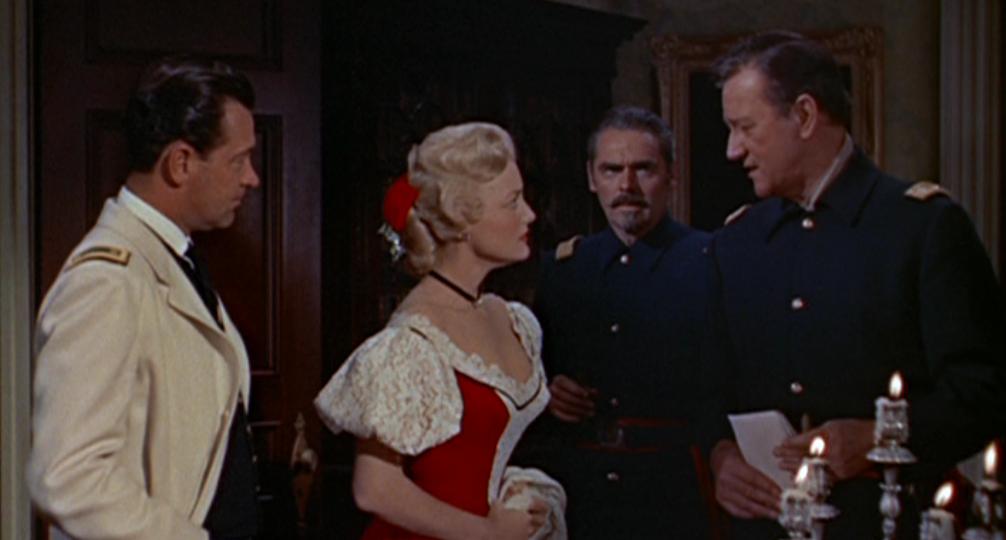 The Horse Soldiers is generally a well-told story executed by John Ford, with only a ridiculous reveal at the end of the picture to mar what is otherwise an excellent film.

Plot: A Union Colonel (John Wayne) and a doctor (Robert Mitchum) clash as their unit engages n a dangerous mission behind enemy lines.

Review: Having seen my share of John Wayne movies, I generally know what to expect: John will be saddled with some strong, albeit naïve younger partner, as the wise old cowboy/soldier travels along a great expanse of land to fulfill some vital mission, but ultimately runs into complications along the journey. I’m not saying that following the same formula is bad, but it typically does not allow for moments of surprise.

While The Horse Soldiers does have elements of a typical John Wayne movie, I can say that there were some pleasant moments of difference in this movie. For starters, anyone who has seen a John Wayne movie can tell you that John Wayne knows everything in these pictures. He always knows best, allowing his experience to show him the correct way.  In this movie, he seems less sure of himself, and his rival, in this case, Robert Mitchum, is no green youngster, but a seasoned vet who can match the Duke in screen presence. Despite Wayne’s misgivings about Mitchum, thinking him ill-suited for the mission they’re on, Mitchum proves more than capable, and at times, even seems wiser than Wayne, an unheard-of proposition in most films featuring the legendary movie star.

Secondly, John Wayne can do no wrong in these movies.  It just isn’t possible. However, he makes a critical mistake in this one, allowing his secret plans for the mission to be exposed to a rival early on in the film. This forces him to alter his plans, something he continually has to deal with, starting right from the very beginning of the picture.  That being said, you still have Wayne at his stoic self, and he turns out to be right most of the time, but it’s still that hint of a weakness that makes this story so unique in the John Wayne library of films. Mitchum is terrific as always, and the rest of the cast is decent enough.

Another thing you’ll learn through this picture is how great John Ford is at staging action. From the battle at Newton Station to the standoff between the Union and a local military school to the spectacular demolition of a bridge at the end of the movie, Ford’s craft is on display throughout. I read somewhere that a stuntman died during the film, causing Ford to lose interest in the whole movie. Well, if this is disinterested Ford than an engaged John Ford would be absolute dynamite.

My only real criticism of the film is a forced love story angle at the end of the movie. While it seems to have been the standard in these types of older films, it really just doesn’t fit or make a whole lot of sense. While it is only a tiny part of the film and it is revealed right at the end, so it’s not like you have it regularly in your face throughout, its an annoying and unnecessary wrinkle that didn’t have to be included.

That’s really my only complaint though, in what is otherwise a very fine film. I know that John Wayne gets some flack for his acting and his movies all following the same formula, and I get the criticism, so if you want something a little different in your John Wayne fare, then I recommend this picture.  If not, then I would still endorse watching it, to see the fine work of John Ford on display.