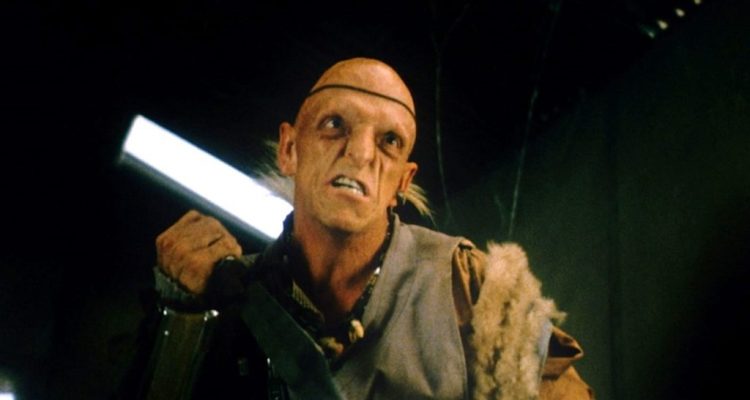 You genuinely care about the family and it really set the bar for other Hillbilly mutant horror slashers. Excellent Blu-ray which is a must have.

Plot: On the way to California, a family has the misfortune to have their car break down in an area closed to the public, and inhabited by violent savages ready to attack.

Review: You may have heard this one before: A family’s Winnebago breaks down in the mid-American wilderness and they’re systematically terrorized, brutalized, and slaughtered at the hands of a band of cannibal cutthroats. It’s been done and redone and Kentucky fried all over again with varying results, but the original recipe pretty much is divided between Tobe Hooper’s The Texas Chainsaw Massacre and Wes Craven’s The Hills Have Eyes. The big difference between Hooper’s film and Craven’s movie is that Hooper’s victims were generally “disposable” cannon fodder, while Craven’s victims are a family you grow to care about before they’re completely torn apart.

The Hills Have Eyes still packs a punch. I just watched Arrow’s brand new Blu-ray of the film in its stupendous 4K restoration, and it was as though it was the first time I’d ever seen it. I’ve watched it a few times over the years, but Craven’s take on civilization versus the wild is still as relevant and resonant as ever. I still felt immense dread while watching it, and when it was over with that indelible and jarring climactic scene that has the end credits crawling before you’ve had a chance to take a breath, I felt relief and exhaustion. Hillbilly mutant horror slashers became a thing in a big way after TCM and THHE, but if you want to see the blueprint, watch Craven’s zinger, and get a load of Arrow’s release while you’re at it.

Arrow Video’s “Limited Edition” package comes chock full of special features and extra bonuses like a fold out reversible poster, mini posters and lobby cards, a hard shell slipcase, a booklet with essays, and tons of watchable features such as several audio commentaries (at least one of them was produced solely for this release), documentaries (including the all-encompassing one that Anchor Bay produced for their DVD years ago), and so many others that it would take paragraphs to list them all. Obviously, Arrow Video holds this film in very high regard, and with reason because it changed the face of horror in a big way, and so their treatment of the film and their respect for the fans who’ve remained devoted to it is commendable and worthy of some kind of award. There’s no better purchase this Halloween season than Arrow’s release of Wes Craven’s The Hills Have Eyes.