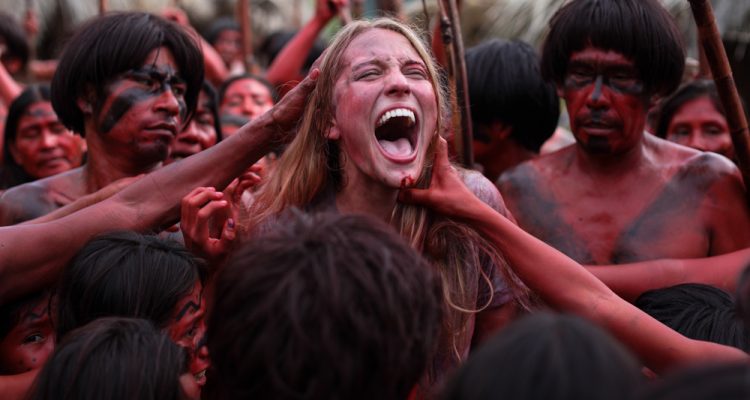 The Green Inferno probably won’t win you over if you’ve never been a fan of Eli Roth but there is enough savagery on screen to make it worth checking out.

Plot: New York college student Justine (Lorenza Izzo), a lawyer’s daughter, meets a student activist named Alejandro (Ariel Levy) when he goes on a hunger strike on behalf of underpaid janitors. Smitten, Justine agrees to help Alejandro undertake his next project: to save the Amazon. She soon learns to regret her decision when their plane crashes in the Peruvian jungle and she and the rest of their group are taken captive by a tribe of hungry cannibals.

Review: This movie had been floating around since 2013 and as soon as I heard it was directed by Eli Roth and was about cannibals I knew it was going to be messed up… and it certainly was.

I think that this may be his best film yet as it manages to build up the tension and once the do-gooders are taken by the tribe it gets truly nightmarish. The gore is turned up to 11 so if you’re feint of heart I’d maybe go watch something else.

Roth always adds a kind of wacky sense of humour to his movies and The Green Inferno has its fair share of moments. The tribe all getting stoned being a particular highlight and we also get a few WTF scenes too which will stick with you after watching it.

It’s a homage to classics like Cannibal Holocaust and other video nasties but The Green Inferno is nicely shot with a big orchestral score which separates it from its cheap and cheerful predecessors.

Overall, The Green Inferno probably won’t win you over if you’ve never been a fan of Eli Roth but there is enough savagery on screen to make it worth checking out.