Fans of all these characters will be both delighted and surprised at how their favorite characters endure, get killed, and are upheld in the DC Universe. It might be the best (but definitely most adult) animated movie from the DC Universe so far.

Instead of waiting for the threat of super titan Darkseid to invade Earth with his hordes of “ParaDooms” (winged creatures that have been cross pollinated with Doomsdays and Parademons), Earth’s greatest heroes – The Justice League – convene on Superman’s orders and decide to invade Darkseid’s home world first and hopefully put an end to his plan to destroy Earth. Superman, Batman, Wonder Woman, The Green Lantern Corps, and all the rest – including dark horse John Constantine and even Lex Luthor – are stunned to find that their opposition is far more than they can handle, even as a team in a coordinated attack, and they’re all utterly and completely crushed in no time at all. Darkseid fills Superman’s bloodstream with cryptonite, turns Batman into his minion, kills off most of the Justice League (the Green Lantern corps is destroyed like paper dolls), dismembers Wonder Woman, and so on. Constantine escapes in a cowardly fashion, Luthor is allowed to live, and a few others are kept alive simply because Darkseid doesn’t feel that they can be a threat, but the worst is yet to come: He invades Earth, obliterates it close to oblivion, kills off most of the population, and his ParaDooms roam around like demonic sentinels, looking to squash survivors. Two years pass, and Constantine is still going strong with his neverending quest to find the last whisky around, and Clark Kent, now without any power, crawls out of hiding to lead one last mission to try to defeat Darkseid, but first he needs to assemble his defeated crew together, starting with Constantine. The only way they’ll have a chance is to get Cyborg and Flash on board (and a little help from Swamp Thing too and the insane Suicide Squad), but it’s going to be hell trying to get that final reckoning with the seemingly all-powerful Darkseid.

From the DC Universe, the hard “R” rated animated film Justice League Dark: Apokolips War might be the most vividly graphic and shocking of all the DC Animated movies, but what’s most surprising about it is that it manages to throw all the DC super heroes together (even Aquaman, who gets chopped in half in the first battle), and it covers a huge amount of ground in only 90 minutes. It’s scary and devastating for a movie targeted at kids, and is the most definitively apocalyptic of anything the DC Universe (even the big budget live action movies) has produced to date. Fans of all these characters will be both delighted and surprised at how their favorite characters endure, get killed, and are upheld in the DC Universe. It might be the best (but definitely most adult) animated movie from the DC Universe so far. From directors Matt Peters and Christina Sotta.

The recent release of Justice League Dark: Apokolips War is available on both a blu ray / DVD / digital release and a 4K Ultra HD / Blu ray / digital release. Special features include “Darkseid: New God, Classic Evil,” a commentary, a sneak peak at the next DC Universe Animated Movie, and some bonus cartoons. 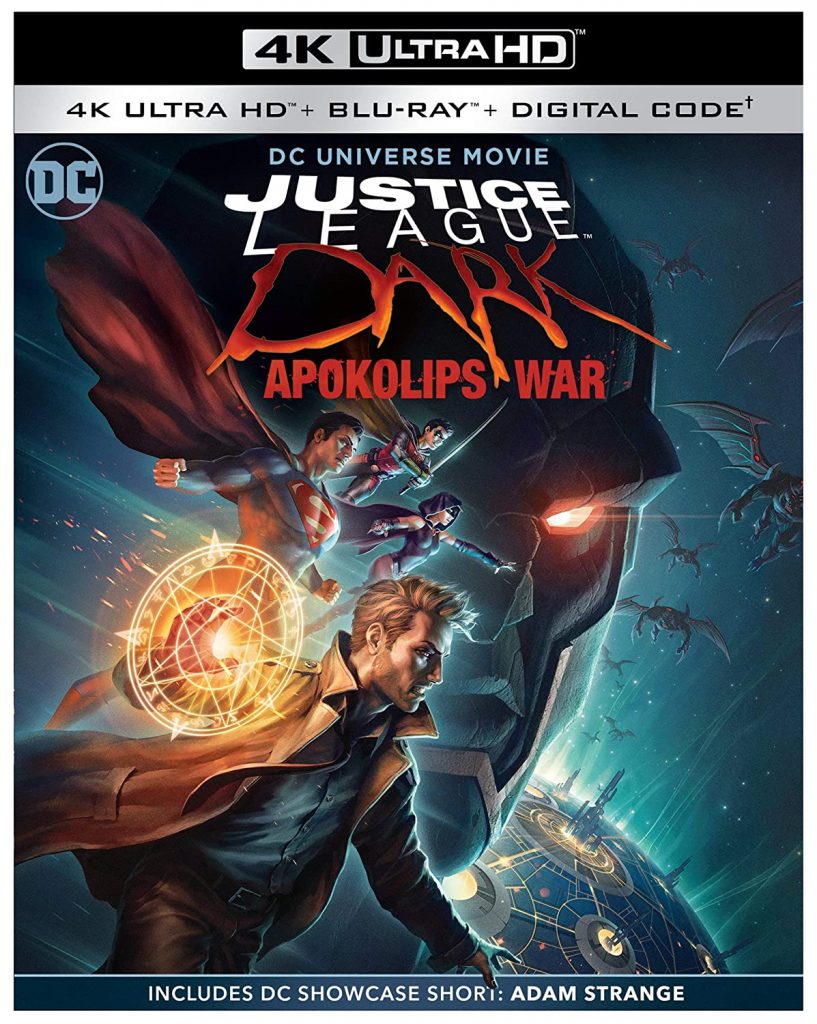