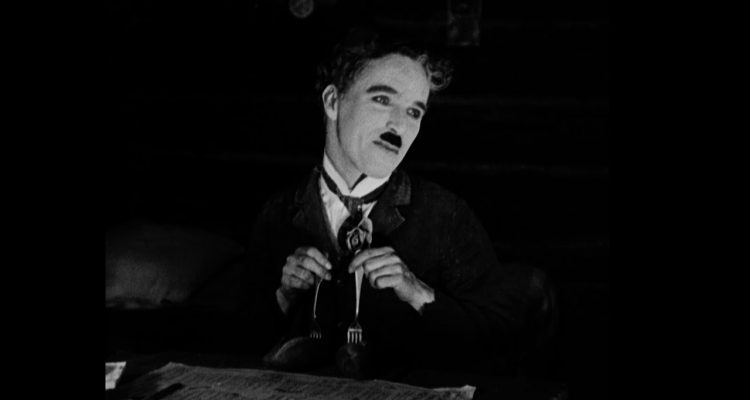 While this entry in Chaplin’s filmography is not as good as some of his others, it offers a few laughs and a heartwarming story tied to the American dream.

Plot: A Prospector (Chaplin) and his friend Big Jim (Mack Swain) brave harsh weather, food shortages and a murderous criminal to stake their claim on a mountain of gold.

Review: The Gold Rush is one of those silent pictures that will definitely amuse you. It has a few laughs, and overall, the story has all the elements you would look for: an underdog hero, an impossible mission, trials and tribulations, and ultimately, triumph. It’s a nice, feel-good movie. However, it lacks a bit in depth that separates it from Chaplin’s true masterworks.

Chaplin, in a version of his infamous Tramp character, is still magnificent in the lead role. His physical comedy is boundless and leads to laughs where the gag itself really isn’t that interesting turning out to be funny. One case in point is when he cooks his own shoe when he and Big Jim are starving. Cooking a shoe is weird for sure, but doesn’t necessarily make you laugh – you’re more likely to feel sorry that someone has been driven to those lengths. However, the ridiculous way to nonchalantly tries to eat his part of the shoe as if it’s actual food is pretty damn funny. Likewise, when he keeps getting blown out of the little cabin he shares with Big Jim because of the wind, again, the concept isn’t that hilarious, but Chaplin’s overselling of what’s going on makes it funnier than it has any right to be.

Unfortunately, and this is rare for such a short movie (clocking in at 79 minutes), it drags a bit. There’s this whole scene where Chaplin is trying to woo a girl he met in a dance hall, where she clearly has no interest in him and is just using him to make her actual beau jealous. There’s this whole scene where he imagines her and her friends coming over for New Year’s Eve, and it goes on far too long – you know that the scene won’t take place, and the Tramp will get his heart broken. When it takes place, it’s not a shock, and it’s just…tedious. I also found that the movie didn’t really delve into any clever subtext like Chaplin’s other great movies like The Great Dictator or Modern Times did.  It’s a rags-to-riches story that doesn’t have any punch. In the end, you feel like you’ve seen a nice movie, but that’s about it.

If you haven’t seen any Chaplin movies, The Gold Rush isn’t a bad place to start – you get all the elements of Chaplin’s exaggerated physical humour, and it’s a non-offensive movie that is sure to please. However, if you’re looking for his truly great films, there are other movies in his library that you should check out instead.