It’s a sweet story they’re telling here, but it’s nowhere near as fun or energetic as Electric Boogaloo in its presentation. Still, fans of Cannon will get information and first-hand accounts here that they couldn’t get from Electric Boogaloo, so it’s a perfect companion piece to that film.

A documentary about the rise and fall of The Cannon Film Group.

The names Menahem Golan and Yoram Globus are synonymous with a great deal of fun at the movies throughout the 1980’s. From their years as independent Israeli film producers and movie theater owners and into their years of making a real go of it as filmmakers in Hollywood, these two cousins really conquered the industry for a handful of years in the 1980’s. They purchased the name “The Cannon Group” from another company and began churning out one movie after another, getting to the point where they had more than 40 films in production in a single year (1986, I believe), completely confounding the movie industry and flipping it onto its head. They’re best known for producing / directing action genre fodder, such as a slew of Charles Bronson flicks (all the Death Wish sequels, for example), Michael Dudikoff films (American Ninja, Platoon Leader, etc.), and a gamut of Chuck Norris pictures (including all three Missing in Action titles), but they’re also known for taking risky chances on heavy dramas such as Runaway Train, Othello from Franco Zeffirelli, and Love Streams from John Cassavetes. It should also be mentioned that Cannon produced a bunch of softcore erotic films like Bolero with Bo Derek and Mata Hari with Sylvia Kristel, which didn’t do the company any favors. All told, Cannon rose to spectacular heights, thanks to the “Go-Go Boys” behind it, with Golan gleefully taking on as many projects as possible, while Globus handled the financing and distributing, but with so much money going out and not enough coming in, the endeavor was bound to collapse under the sheer strain of so many projects. The problem with Cannon was that they never had a single bona fide smash hit (the breakdance films Breakin’ and its sequel Breakin’ 2: Electric Boogaloo are the only exceptions), and so there was nowhere left for the company to go but bust. The Go-Go Boys tells a rather genteel and kind true story of the partners who basically divorced and decades later buried the hatchet together after all of their differences.

Rushed into production to beat a competing documentary called Electric Boogaloo: The Wild, Untold Story of Cannon Films, The Go-Go Boys basically tells the same story but without the pizzazz or breadth of topic. This film really concerns itself with the story of the two cousins and uses lots of interviews (especially with Golan and Globus), with other interviews interspersed, with tidbits from Jean-Claude Van Damme, Dudikoff, Billy Drago, and Eli Roth, to name a few. The interviews with the actors and filmmakers are so minimal that it’s unavoidably disappointing, but this film – unlike Electric Boogaloo – does have the participation of both Golan and Globus, so that’s a big plus. It’s a sweet story they’re telling here, but it’s nowhere near as fun or energetic as Electric Boogaloo in its presentation. Still, fans of Cannon will get information and first-hand accounts here that they couldn’t get from Electric Boogaloo, so it’s a perfect companion piece to that film. From director Hilla Medalia, whom you can hear asking her questions to her interview subjects.

MVD Rewind has just released a Blu-ray edition of The Go-Go Boys and it comes with a reversible slipcover, plus a foldout poster. 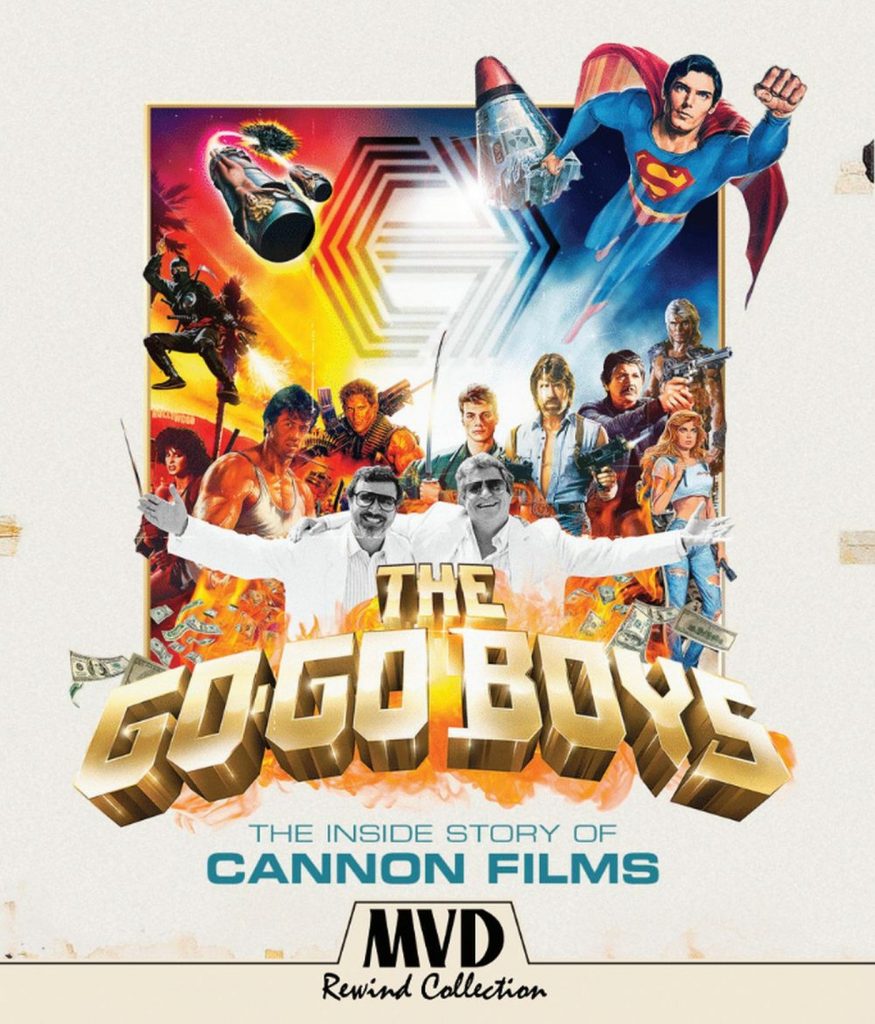