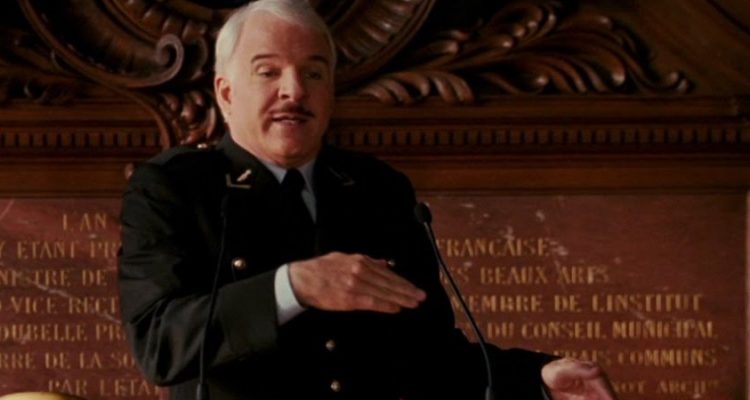 So far, I’ve looked at absurdists, smart alecks, physical comedians, comedians who use wordplay…but how about someone who can do all of that? What about someone who is so versatile and whose work is so varied that you either have seen them embody all of those, or you believe they can? I present to you exhibit A – Steve Martin.

When we’re talking about the work of Stephen Glenn Martin, I feel like you have to start with one of my personal favourites – Roxanne. Based on the story of Cyrano de Bergerac, Martin’s character, a fire chief, suffers from two afflictions – a huge nose and an all-consuming infatuation with Darryl Hannah’s character. An altruistic (if somewhat unbelievable) person, Martin tries to help the man Hannah is attracted to woo her in his stead. But this isn’t Legends of Romance — where’s the comedy? Well, there’s a nice sequence where Martin rattles off a series of giant nose jokes to show up an insensitive lout in a bar. Then there’s the part where he tries to get the clueless fireman who Hannah has fallen for to wax eloquent in the moonlight – the guy apparently “had worms” instead of words.  Even a small bit like Martin buying a newspaper from a dispenser vending machine, only to glance at it, scream, and literally pay to put the newspaper back in the vending machine. You can’t make this stuff up, man.

Next, I’m turning to that oddity, a movie based on a long-running television show that was actually good, the one, the only, Sgt. Bilko. While I confess that I never did watch the Phil Silvers show, I had an idea of what it was about, and knowing the Phil Silvers persona, I figured the Bilko character must be a fast-talking con artist. After all, the word “bilk” is literally in his name! Martin really shines here in the wholly irresponsible but totally charming title role. Whether it’s hiding gaming tables that he’s got out in his barracks or unconvincingly trying to convince the base leader that his men are competent soldiers, Martin motormouths his way through the movie to great comic effect. I especially loved the scene where they would be doing army maneuvers in Las Vegas – you could literally see the gleam in his eyes.

Bowfinger is possibly my favourite of all the Steve Martin movies. It probably has something to do with the concept of Martin, a low-rent movie director in this movie, filming an A-list star (in this case Eddie Murphy) without Murphy’s knowledge. A clever send-up on self-centred Hollywood, the movie is absurd on many levels. For example, who else would scare a paranoid Murphy by having a pair of high-heeled shoes worn by a dog follow him around an underground parking lot? Or forcing Murphy’s character’s twin brother (also played by Eddie) running across a busy Los Angeles freeway?  The best though is the fake movie they shot at the end of the picture – aptly named “Fake Purse Ninjas.”  Just seeing Martin and Murphy pretending (terribly) to do martial arts (where the stuntmen flip, even when the kicks are nowhere near them) is worth the price of admission alone.

Next, we go to…gasp…a remake?  Not only that, a remake of a legendary comedy movie, no less, The Pink Panther.  While I was dead-set against this movie (even with Martin’s casting), I have to admit that Steve did a hell of a job as Clouseau. He was dimwitted, ridiculous, and hilarious – the full range of his skills were on display.  To this day, I can’t order a hamburger without going through all the ludicrous permutations he does of the word in the movie – I usually just end up ordering the steak.  Then there’s the great moment when he decides to “look in Paris for everyone named You” after a witness tells him that she heard the victim say, “Oh, it’s you.” – which just leads to a hysterical moment where an Asian woman yells at him.  Then there’s showing a technique of interrogation where he hooks electrodes up to the person’s testicles – only to demonstrate on himself, leading to him walking around in the next scene with his crotch smoking. While he has played willy and intelligent characters throughout his career, Martin is so multi-faceted that he can play dim-witted ones with equal success.

Steve Martin is definitely one of the most versatile of all the comedic legends. While I have only skimmed the surface of his career, his movies, from The Three Amigos to Father of the Bride, from Planes, Trains and Automobiles to All of Me, showcase his immense talent. We have been fortunate to see him perform over 50 years and while he is now at the age of 75, here’s hoping that there are still a few great years left in his generous tank of comedy.