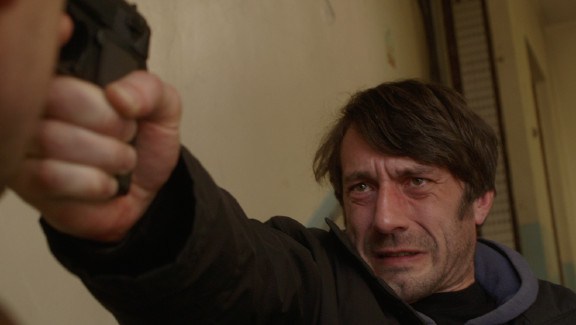 Plot: A homicide detective goes undercover as a patient to investigate a psychotherapist he believes is linked to a strange double murder. As his therapy sessions continue the line between fantasy and reality begins to blur.

Review: Not good enough. Gareth Tunley’s The Ghoul is about a character who wanders around through life believing that he’s not good enough for anything other than what he has, which is a head full of cobwebs and questions. When we first meet Chris (Tom Meeten), we believe he’s a detective, but it very quickly becomes apparent that he’s nothing of the sort. He stumbles into a crime scene, is told how two men killed each other under impossible circumstances, and then he “goes undercover” with the intent to study one of the victims who was seeing a psychotherapist. Chris makes an appointment with the same therapist and does some investigating, but clearly his mind is shattered and his path is becoming murkier as his therapy reveals that he’s broken and damaged, perhaps beyond repair. Within a month, his therapist refers him to another therapist, a Dr. Morland (Geoffrey McGivern), who takes an unconventional approach to dealing with him. Morland’s fascination with the occult and magic intrigues Chris to the point where Chris becomes locked in a strange loop where his mind can’t work itself out of itself, and suddenly he’s found himself in the middle of a quest that he has no idea he was on: Escape from reality.

The Ghoul is an intriguing little dramatic thriller, but it can’t seem to shake loose the sense of familiarity. It feels like I’ve seen this movie before somehow in other iterations or versions in anthologies like Hammer’s House of Horror, or Tales From the Crypt episodes. The very low key approach to telling the story is virtually nondescript and pedestrian, and filmmaker Tunley’s take on the material is very episodic and tired. The look of the film is TV quality, and the actors, working from Tunley’s generic script, perform admirably.