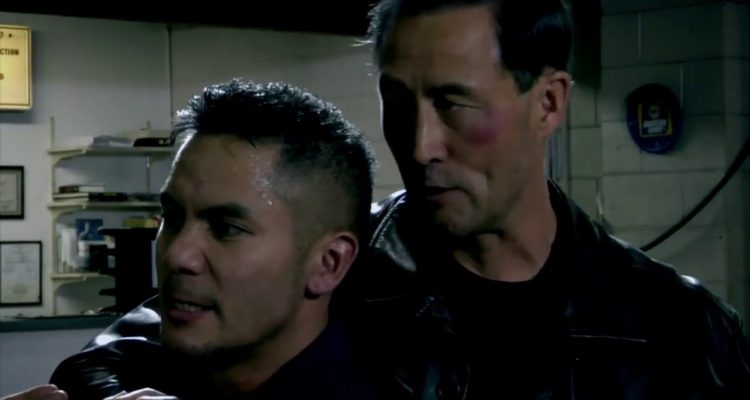 Martial arts expert Jino Kang (Blade Warrior) stars and directs in Fist 2 Fist, an ’80s/’90s stylistic throwback clearly made on a very limited independent budget.  A reformed criminal named Ken (Kang) runs a martial arts dojo and, after a fateful altercation, takes in an orphan whose parents were killed by a former associate and underling turned crime boss, Tokyo Joe (Bill Duff, Tooth and Nail), who is still serving time in prison… but is getting out soon and looking for revenge.  The story and action unfolds in the San Francisco setting through a series of fights, training sequences and montages, with plenty of cameos from recognizable names such as Eddie Bravo, Gene LeBell and Charles Gracie, among others, with the occasional plot twist thrown in.  The action culminates in a cage fighting contest between each faction’s younger representatives, with some chaos happening behind the scenes in a fashion very reminiscent of the original Kickboxer.

The story itself is fairly basic in premise, although there isn’t quite enough here to get the audience behind the younger characters, and the numerous fight scenes, which are hit and miss, tend to bog down the flow of the film.  Many of the fight sequences near the halfway point of the movie come across as flat without much flash and just seem to be there for the sake of something to be on the screen.  However, Kang’s own fight scenes, choreography and cinematography are where this film really shines, as is the over the top performance of Bill Duff’s Tokyo Joe.  His villainous presence truly appears hateful and imposing, and eerily resembling the Mr. Big character from the ’90s SNK fighting game franchise, Art of Fighting.  The fight choreography and camera work is handled in a way that makes it more convincing and fast paced than even most studio blockbuster action flicks, and some of the cinematography and lighting has an Albert Pyun feel to it.  For such an early effort (this was Kang’s second film after Blade Warrior) and the obvious budget limitations, this is a seriously impressive achievement.  Fans of independent film owe it to themselves to give this a shot, and should go out of their way to see Kang’s follow up, Fist 2 Fist 2: Weapon of Choice, which takes everything that worked in this movie and turns the pace up to the max.