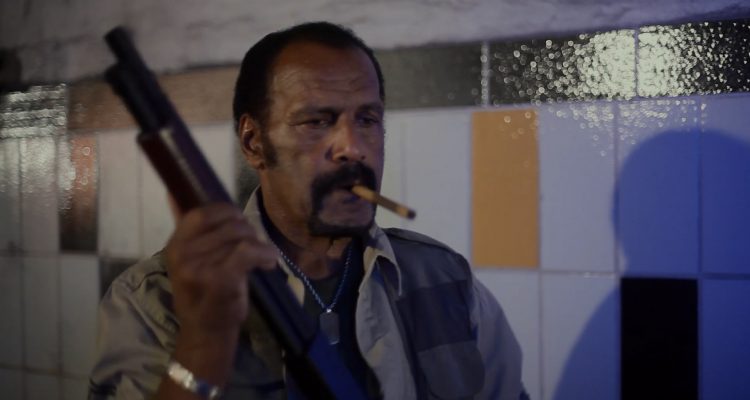 Stoker – “The Leader” (Fred Williamson) is a mercenary with a mission. In order for him to complete this mission, he will have to assemble a team of not only the best in the business;he needs people he can trust. He calls in a few favors and assembles the toughest, most badass group of mercenaries loyalty can buy. With David – “The Fighter” (Mike Möller), Reiko – “The Samurai” (Hazuki Kato), Darwin – “The Texan” (Everett Ray Aponte), Heinrich – “The Priest” (Wolfgang Riehm), John – “The Sniper” (Nico Sentner), Brenner – “The Blade” (Dominik Stark) and Laurie – “The Rookie” (Josephine Hies) by his side, the mission should be a breeze. It quickly turns into an un-winnable battle with eight people battling against eight hundred, all vying for control of a doomsday device lost during World War II. With the odds stacked against them, they’re ready to risk life and limb to save millions of lives. Director Nico Sentner, known around the world as “the Godfather of Krautsploitation” says in his statement: “From my early childhood, when I was still behind the Iron Curtain, I wanted to become a filmmaker. And I am very pleased that the reunification in my country finally gave me the opportunity to go for my dream.

“I grew up on John Carpenter movies, and he is one of the main reasons why I wanted to become a filmmaker. My favorite film of his is ASSAULT ON PRECINCT 13. I also really liked mercenary films like PREDATOR and THE MAGNIFICENT SEVEN where each mercenary has their own distinct personality and character. You really didn’t want them to die because you liked the characters so much. Behind the Iron Curtain, there were only a very few films from the West which were allowed and movies that were quite commonly allowed by the East German government were westerns, so THE MAGNIFICENT SEVEN was a huge influence on me.

“So, naturally ATOMIC EDEN starts out as a mercenary movie and then it ends up in a single location as an Alamo scenario much like ASSAULT ON PRECINCT 13. In modern Hollywood movies I’m nearly always disappointed by all the CGI overkill. I think these effects can take away the magic from a good story, when the focus of the film is purely on the visual effects. It was important for me with ATOMIC EDEN to do everything using practical effects to give it the retro look and feel of the action films from the 80’s and early 90’s we all have watched and loved. Overall it worked out well and we have a great level of practical, in-camera action in the movie. ATOMIC EDEN is my homage to the films that inspired me, and I think it will connect with fans of hardcore martial arts action movies. Enjoy!”

ATOMIC EDEN is now available on the following VOD platforms and streaming services in the United States. Please see the links below:

ATOMIC EDEN is also available on COMCAST, xfinity and INDEMAND