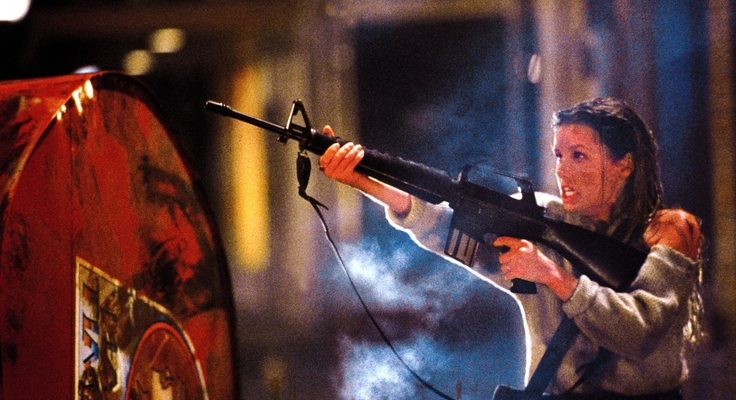 Plot: A deadly blob from another planet consumes everything in its path; teenagers attempt without success to warn the townspeople, who refuse to take them seriously.

The Blob is such an iconic movie title; the original movie starring Steve McQueen is regarded as a horror/sci-fi classic and this 80’s remake was always seen as inferior. I’ll be honest and say I have never actually seen the original movie but for me The Blob (1988) is everything right with 80’s horror. It’s cheesy, gory and has a real sense of fun; literally as soon as it’s over I would happily watch it again.

The cast all play it serious including a very young Kevin Dillon who is our hero Brian Flagg; he’s a loose cannon who does things his own way and is seen as an outsider in his small town. When the blob starts to kill the locals it’s up to Flagg and Meg (Shawnee Smith) to save the town from destruction. It’s not just this creature they have to worry about but some dodgy government types who are trying to protect their secret experiment that has gone wrong.

There are a few shocks (like a kid who gets killed by the creature) and I was convinced nice guy Paul Taylor (Donovan Leitch Jr.) at the beginning was going to be our hero but nope; he died too! It’s never remotely scary but it was some (mostly) impressive practical effects and gory moments however, there are several scenes which don’t hold up well visually.

It has a great supporting cast including Art LaFleur, Bill Moseley and Paul McCrane who all manage to keep a straight face throughout the madness. I liked how none of the characters felt like horror movie stereotypes; they (for the most part) felt like real people who were likable and you wanted them to escape. Keep your eyes open for a young Erika Eleniak who comes to an unpleasant end in the car with her boyfriend.

The Sheriff has a few choice lines too like “I feel like the one legged man in an ass kicking contest” so it never takes itself too seriously.

When the blob makes its kills you partly cheer as they are so gruesome but never really disturbing as it’s all so wonderfully absurd.

It’s predictable stuff too as you can work out from early on how they can hurt/kill the creature so there isn’t much in the way of surprises.

It was open for a sequel too which I would have enjoyed but sadly it never came; there was talk a few years ago of Simon West (Con Air) directing another remake of The Blob but that never materialized either.

To this day The Blob remains pure 80’s cheese-filled greatness with some imaginative death scenes and a sense of fun but also a strange sense of Americana with the small town characters all coming across as very appealing.